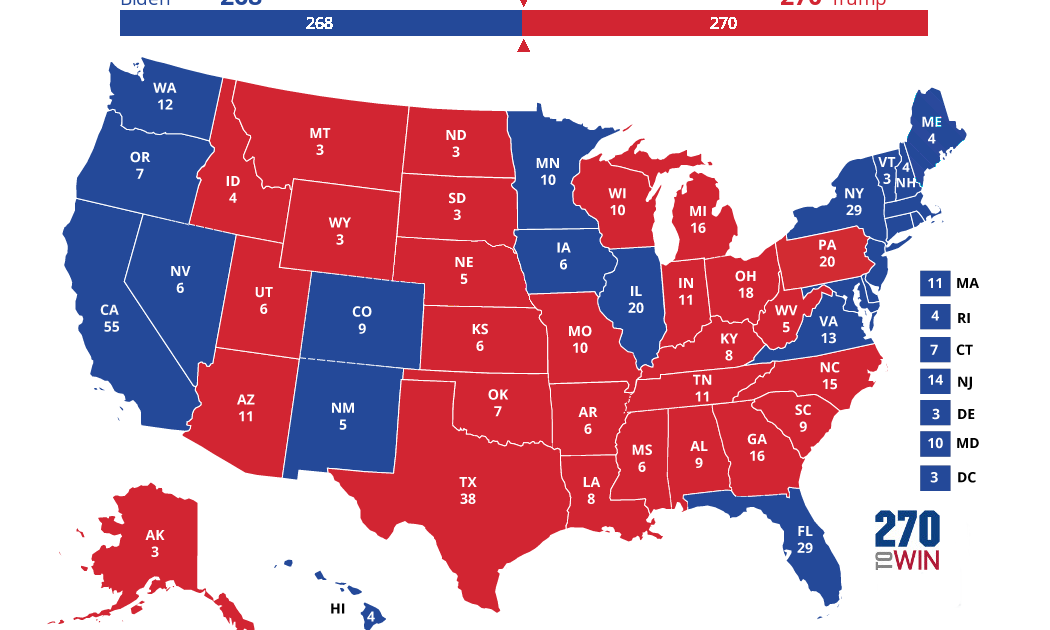 There is a lot of speculation that the counting may take days or even weeks to determine the winner of the presidential race. While we won’t have an official count for a while, there is a good possibility that we will have a sense of how the race is going early in the evening.

My sense of the race is that it can either go narrowly to Trump or Biden or it can be Biden in a landslide. The one possibility that I don’t see as likely is a Trump landslide, which would require a great many polls to be wildly inaccurate. If we know a winner on Tuesday night, it will almost certainly be Biden.

If there is no winner on Tuesday night, then the outcome will be close. President Trump’s chances of victory will improve if the election is so close that a winner cannot be declared on Tuesday night because that will invariably mean that some tossup states are falling into the red column rather than going to Biden, who the polling favors.

One early way to tell if the night is going to be a very good night for Joe Biden is to watch Florida and North Carolina. The good folks at FiveThirtyEight have compiled a detailed list of state election information that discusses when polls close and how quickly results are expected.

Polls in the eastern part of Florida close at 7 p.m. Eastern time while the panhandle polls are open until 8 p.m. ET. Florida is accustomed to close elections and typically counts ballots very quickly. Additionally, Florida allows early counting and does not accept most ballots after Election Day. The combination of circumstances means that Florida will probably be one of the earliest states to be called.

If Florida goes to Trump, it could be the beginning of a long night for the Biden campaign. On the other hand, if Biden wins Florida, especially by a large margin, Donald Trump’s chances of victory decrease dramatically.

North Carolina is also a bellwether state. Tarheel State polls close at 7 p.m. ET and officials have said that 80 percent of the vote totals could be released as early as 7:30. The caveat here is absentee ballots can be counted if they arrive as late as Nov. 12.

If North Carolina goes Biden, Donald Trump will have to win the entire Rust Belt as well as Arizona to be re-elected. Trump’s odds get really long at that point. If North Carolina remains too close to be called, Trump can stay in the race at least a little bit longer.

Georgia is a third early state to consider. Although typically deep red, Georgia is a battleground state this year and is rated a tossup. Peach State polls also close at 7 p.m. and only overseas ballots are accepted after Election Day. The question here is how quickly the state can count ballots, especially since the election looks very close. A big Trump lead in Georgia could mean that state polls elsewhere are off and that Trump may beat the polling.

If the election is decided by the Rust Belt, it may be several days due to the acceptance of late absentee ballots. Wisconsin results should be in by Wednesday, but Michigan might not be called until Friday and Pennsylvania could be even later.

Polls in Arizona, one of the other hotly contested states, do not close until 9 p.m. local time (11 p.m. ET). Many votes should be counted by 10 p.m. but absentee ballots might not be fully counted for a few days.

The official results of the election won’t be in for a few days, but Florida and North Carolina will give clues to the nature of the race. If it’s a Biden blowout, we should find out relatively early.