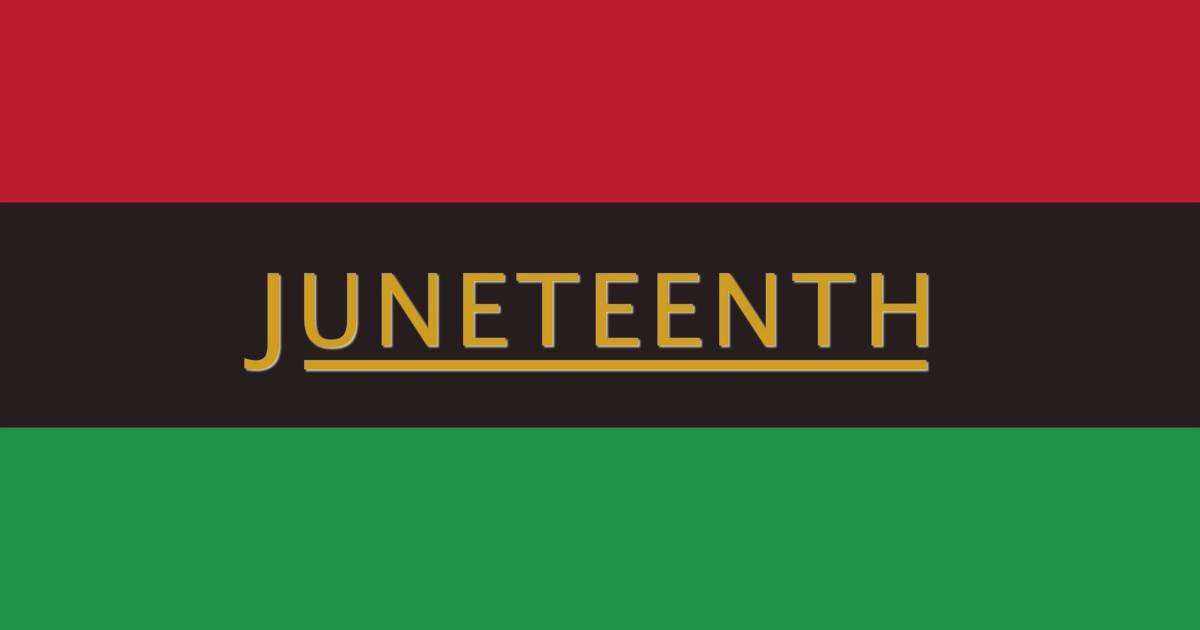 I have to confess that I had never heard of the Juneteenth until about five years ago. Growing up in Georgia, I thought I was well-versed in the history of the War Against Northern Aggression (or the Civil War if you prefer), but I wasn’t aware of Juneteenth until we moved to Texas.

Juneteenth is a commemoration of the day that the last American slaves were freed in 1865. On June 19 of that year, the Union army arrived in Galveston, Texas and informed the former slaves there that President Lincoln had freed them two years earlier with the Emancipation Proclamation. The celebration known as Juneteenth started the next year.

When President Biden and Congress passed a law this week to make Juneteenth, officially “Juneteenth National Independence Day,” a federal holiday, it was to celebrate the end of a blot on American history. When the United States was founded on the “self-evident” truth that “all men are created equal,” the Framers overlooked the tens of thousands of people held in bondage throughout the 13 former colonies.

While it is true that this evil was not unique to the United States, it is especially tragic here because America is the only country that was founded on the principles of liberty and equality. It took the most destructive war in American history to atone for what has been termed America’s original sin.

In his proclamation of the first national Juneteenth holiday, President Biden put it well when he said that the day is not only a day to “remember the moral stain and terrible toll of slavery… but it is a day that also reminds us of our incredible capacity to heal, hope, and emerge from our darkest moments with purpose and resolve.”

What the Juneteenth is not is an attempt to replace Independence Day as some Republicans have suggested. To the contrary, Juneteenth is a day to celebrate the fulfillment of the Founding Fathers’ vision of liberty and justice for all. (Interestingly, Juneteenth was already a holiday in every state except South Dakota before it became a federal holiday.)

I think that most people understand this, but as usual, a few people do not. In this case, 14 Republicans voted against the creation of the new holiday. One of those was Matt Rosendale of Montana, who tweeted that Juneteenth was an attempt to “replace the Fourth of July” with a holiday that focuses on “America’s darkest moments.” This is incredibly tone-deaf.

To start with, the Fourth of July is not a holiday. Independence Day is the holiday that occurs on July 4. If we’re going to nitpick, we may as well be accurate.

Second, neither July 4 nor Independence Day is being replaced. Independence Day will still be the holiday on which we celebrate the founding of our nation. Nothing about Juneteenth is going to change that.

Third and most face-palm-worthy is Rep. Rosendale’s description of abolition as “one of America’s darkest moments.” I’ve said for years that many Republicans have a bad habit of taking the bait when liberals offer them a chance to sound racist. In this case, Rosendale wasn’t even offered bait. This was an unforced error of his own making.

Perhaps Rosendale was referring to the general unpleasantness of the War Between the States, but if so, he’s still off the mark. Memorial Day also has its origins in the conflict and is even more inextricably linked to America’s darkest hours by memorializing the 620,000 dead from the Civil War (more than any other conflict including World War II). Even the Republican Party has its roots in the struggle against slavery.

Does Rosendale have a problem with Memorial Day, the “Battle Hymn of the Republic,” and the Confederate flag as vestiges of one of our darkest hours? My guess is that he does not.

How could any congressman of even moderate intelligence not see that calling a holiday that celebrates abolition a dark moment would be construed as bigoted at best and a defense of slavery at worst?

Honestly, even the dimmest Republicans must be aware that they have a problem with minorities. One would think that they would be sensitive to how their rhetoric sounds to other demographic groups aside from whites. I’m not saying that they should pander to minority groups, but they should put themselves into the shoes of minority voters and think twice before they make comments that can come across as racially charged.

And Rosendale isn’t the only one. Charlie Kirk also claimed that Juneteenth is an attempt to replace the “Fourth of July” in a series of tweets. Kirk also complained that, with Juneteenth on the federal calendar, there are now “two summer holidays.” As arguments go, this one is asinine.

For starters, where is it written that there can only be one holiday per season? Kirk must be really upset in December as Chanukah, Christmas, New Year’s pack the calendar.

Second, there were already more than two summer holidays. We have Flag Day on June 14 (which is technically not a summer holiday since it occurs before the summer solstice but then so does Juneteenth) and Labor Day on the first Monday in September. By Kirk’s reasoning, these holidays need to be stricken from the calendar as well.

I said before that Republicans have a race problem. That much should be obvious. My Twitter friend, The Values Voter, pointed out recently that Republicans have to win white men by ever-increasing margins to win elections to make up for a growing nonwhite population that leans Democrat. In 2020, Donald Trump won white males by 23 points and still lost the election. (CNN exit polling shows that Trump won white men by 31 points in 2016 and still lost the popular vote.) Appealing to white males is not a sustainable path to victory for Republicans.

The Republican autopsy after Mitt Romney’s 2012 election loss made the same realization that Republicans cannot continue to survive as a “white” party. Minority groups view the GOP as “unwelcoming,” the autopsy noted. That has not changed in the age of Trump. Candace Owens, Kanye West, and Diamond and Silk may make white Republicans feel better about their minority support, but they are not moving the needle with black voters.

The first step in repairing the damage that Republicans have done to their image with black voters is to take the advice of Hippocrates and “first, do no harm.” Don’t call abolition a dark day. Don’t assume that every black person shot by police had it coming. Don’t minimize white-on-black crime by saying that more blacks kill other blacks. Don’t tell jokes about minorities on welfare and kids without fathers. And don’t look for reasons to oppose a holiday that celebrates abolition.

Ed Willing hit the nail on the head when he wrote recently, “Somehow in the midst of 2020’s mainstreaming of critical race theory, many conservatives found the audacity to prove the arguments of CRT in their demonization of it, and they don’t even see the irony.”

To many minority Americans – not to mention nonracist whites – the reflexive opposition to Juneteenth makes it seem that critical race theory is right. Maybe there is systemic racism in our country if we can’t even commemorate the abolition of slavery without triggering a meltdown. And this isn’t something that liberals are doing to conservatives, it is something that those on the right often do to themselves.

The good news for people who still hope for a conservative party that can appeal to (or at least no alienate) minorities is that only 14 Republicans voted against the Juneteenth bill. More Republicans cosponsored the bill than voted against it. The bad news is that the 14 nay votes are the faction that will define the party because they are so far out of the national mainstream.

That is something worth celebrating.