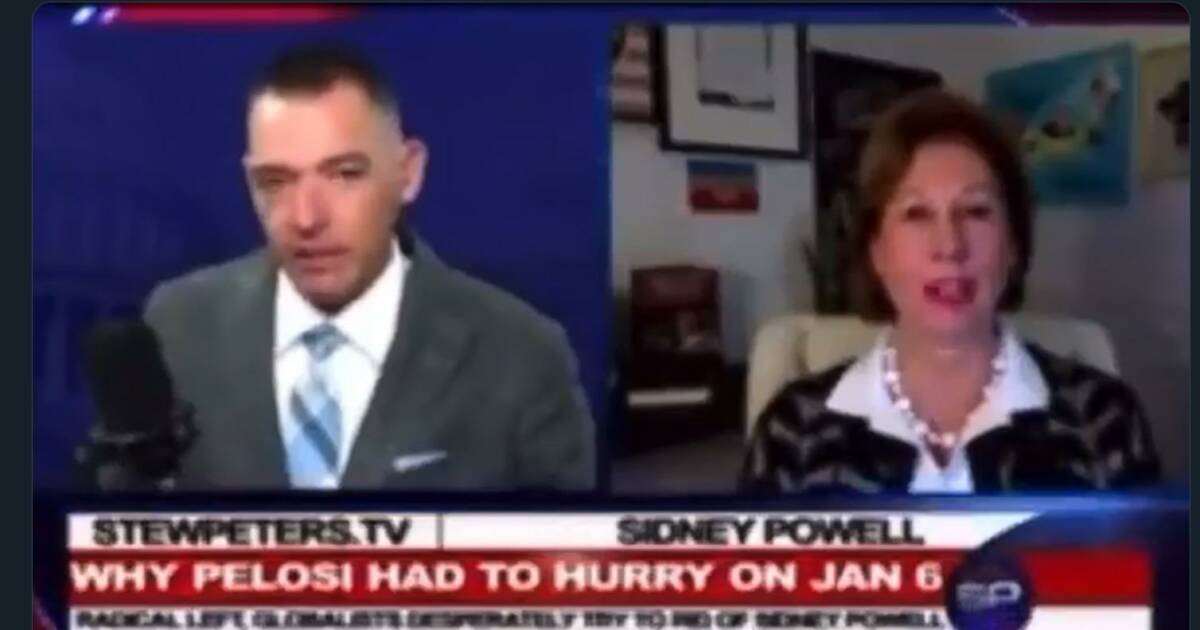 Sidney Powell can’t stop talking. Recently she was interviewed by Stew Peters, a right-wing pundit with an internet talk show, and what she had to say was shocking.

In a clip posted to Twitter by Ron Filipkowski, Powell describes what was allegedly happening behind the scenes on January 6, saying, “We were filing a 12th Amendment constitutional challenge to the process that the Congress was about to use under the Electoral Act provisions that simply don’t jibe with the 12th Amendment of the United States Constitution.”

She went on, “And Justice Alito was our circuit justice for that. Louis Gohmert (R-Texas) was the plaintiff in our lawsuit. And we were suing the vice president to follow the 12th Amendment as opposed to the [Electoral Count Act].”

“That was the main point,” Powell continued, “And Nancy Pelosi had finagled to file an amicus brief in it. There had been inside goings-on in Congress whereby, I believe it was Steve Scalise (R-La.) and [House Minority Leader Kevin] McCarthy (R-Calif.) that kept her from being an actual party. She wanted to work her way into the case as a party, but somehow politically that didn’t happen.”

“So,” Powell went on, “She got notice when we made our filing because she wanted to file an amicus brief or had filed an amicus brief. Then everything broke loose and she had to really speed up reconvening Congress to get the vote going before Justice Alito might have issued an injunction to stop it all, which is what should have happened.”

Powell’s revelations may or may not be true. They could be the ramblings of a habitual liar who has spent the past year spinning tall tales about voter fraud, stolen elections, and Krakens. But she might be telling the truth.

In fact, several details of Powell’s statement do check out. There was a lawsuit called Gohmert v. Pence that was dismissed by a federal judge in the Eastern District of Texas for lack of standing on January 1. Speaker Pelosi did file an amicus brief in the case. Trump’s legal team did apply to Justice Alito, the Supreme Court justice responsible for emergency petitions from Texas, for an injunction “directing respondent Vice President of the United States to refrain from invoking the dispute-resolution provisions of the Electoral Count Act of 1887” until the Court could decide whether to act on the question of whether the “ECA violates the Electors Clause, the Twelfth Amendment, and the Constitution’s structural protections of liberty.” This application was filed on [wait for it] January 6, 2021. Justice Alito denied the request the next day.

Ever since January 6, there have been questions about the end game of the Trump campaign’s strategy to deny Joe Biden the victory that he won. In recent weeks, the strategy has begun to come to light. Last week, I wrote about Trump campaign lawyer John Eastman’s memo detailing a proposed strategy for Vice President Pence to unilaterally throw out the electoral votes of seven battleground states, coincidentally all lost by Trump, and crown a new victor based on the lower number of electors.

The legal action that Powell describes sounds a lot like it was designed to force Mike Pence into following the plan laid out in Eastman’s memo. Both Powell and Eastman refer to the 12th Amendment and the Electoral Count Act and their belief that the two laws conflict. On a recent episode of Advisory Opinions, David French and Sarah Isgur took a deep dive into the clumsily written Electoral Count Act and why Eastman’s solution is even more problematic. If you’re interested in the details, I recommend that podcast but suffice it to say that even if the Act is unconstitutional, Eastman’s solution of simply choosing not to count several cherry-picked states has no basis in law at all.

So, what does all this mean? Well, first off it means that Gohmert, Scalise, and McCarthy can expect to be in the second tranche of subpoenas issued by the January 6 commission. If Powell is telling the truth, the trio may be hip-deep in the violence that erupted on January 6 as well. It also goes a long way toward explaining McCarthy’s attempts to kill and then sabotage the commission.

I don’t think that Alito is to be included in the plotters. Supreme Court justices are assigned to different judicial circuits to act on emergency requests. Justice Alito happens to be the circuit justice for Texas, the state where Gohmert v. Pence was filed. In other words, Alito was the circuit justice for Powell’s lawsuit because he had jurisdiction and not necessarily because they considered him to be sympathetic. At this point, there is no evidence that Alito conspired with the insurrection plotters.

Powell’s story also explains why Congress didn’t delay the counting of the Electoral College votes after the attack on the Capitol. I remember that, at the time, I thought it was unlikely that the process would be completed due to the damage done by the rioters and security concerns. There were many reasons not to delay the certification of the electoral votes, but the pending lawsuit and the possibility of a Supreme Court injunction would have added even more urgency.

Powell’s revelations are further illustrations of why the January 6 commission was needed. The Trump supporters, especially those in the Republican Party who could be implicated in Trump’s attempt to steal the election, would very much like to sweep the matter under the rug and move on (to use a Democratic phrase from the Clinton years), but our democracy cannot afford to let the insurrectionists get away their failed coup attempt. All too often, failed coups are followed by successful ones.

Trump’s clumsy attempt to steal the election had little chance of success, but as I’ve said in the past, it did pose a very real threat of plunging the country into civil war. The millions of Americans who supported Joe Biden – as well as millions of honest Trump supporters who did not condone the president’s attempt to overturn the will of the voters – would not have stood idly by as Trump stole the White House.

It’s important to keep pulling at the various threads hanging from the unraveled insurrection attempt to see where they lead. The people who were involved in trying to twist the Constitution for their own nefarious purposes need to be held accountable and voters need to ensure that they are never trusted with power again.