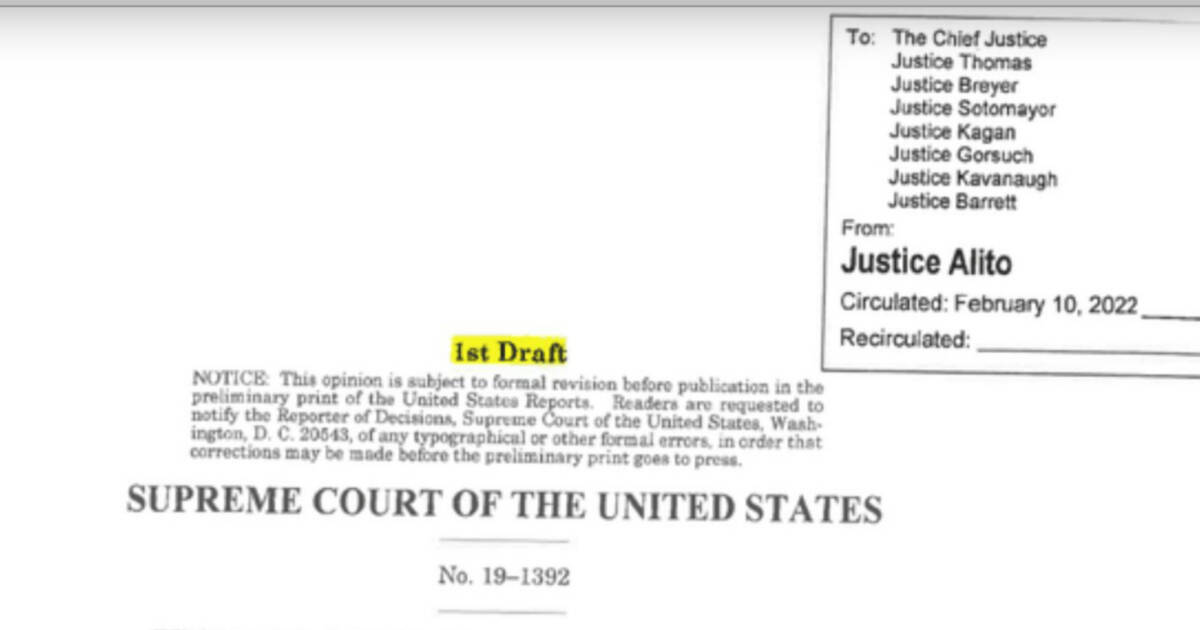 History was made on two separate fronts yesterday when an unprecedented leaked draft opinion from the Supreme Court heralded the likely overturn of Roe v. Wade, the almost-half-century old decision that legalized abortion nationwide. Like Elon Musk’s takeover of Twitter, the ruling that may overturn Roe has not yet become reality, but partisans are proceeding as if it has.

The kerfuffle began with an exclusive report by Politico on Monday night that quoted parts of a draft majority opinion written by Justice Alito in the case of Dobbs v. Jackson Women’s Health Organization, a case that I profiled back in May 2021. Alito’s draft weighs in at an impressive 98 pages, but if you want to read the entire opinion, you can find it here.

Not long after the draft was dropped, SCOTUSBlog, an independent but trusted reporter on Court matters, reported that the leaked draft “is almost certainly an authentic draft opinion by J. Alito that reflects what he believes at least 5 members of the Court have voted to support — overruling Roe. But as Alito’s draft, it does not reflect the comments or reactions of other Justices.”

So, we don’t know for sure that the justices have voted to overturn Roe, but we do know that Alito thinks that they have. The draft was dated February 10 so what might have happened behind the scenes since then?

This brings up a lot of questions. Was Alito’s assessment of the Court’s decision correct? Who leaked the draft? Why? What happens next?

The answer to the first question won’t be known until the Court releases the full and final decision on the case. That was supposed to come in June or July, but in the wake of the leak, some are calling for the Court to release its decision early.

The identity of the leaker is also not known, but it was almost certainly a progressive clerk at the Supreme Court or a staffer for one of the progressive justices.

As the justices decide a case, they circulate their opinions to the other justices to see who will join in their opinion. Justices might reference an opinion written by another justice in either a concurrence or a dissent. The draft that was leaked notes that it was being circulated to the other eight justices. Clerks and staffers in the other offices would have had access to Alito’s draft and one of them probably made an illicit copy.

The motive for the leak is also unknown. The most likely explanation is that the leaker wanted to pressure any justices who might be on the fence to vote to preserve Roe. It’s likely that the leaker agreed with Alito’s assessment of the tally on the case.

What happens next will depend on the ultimate and final decision by the Supreme Court. Assuming Alito’s assumption is correct, there will certainly be protests, weeping, and gnashing of teeth from the pro-abortion quarters, but it might not change as much as you think. That’s because striking down Roe would not result in a national abortion ban. It would simply allow states to pass their own laws regulating the practice.

Data from the Guttmacher Institute shows that states are already divided by pro and anti-abortion laws. Within the bounds previously set by the Supreme Court, pro-life states have made it difficult to operate abortion clinics and generally have lower rates of abortion. Pro-choice states generally have more clinics and abortions. Given this lay of the land, if pro-life states outlaw the practice outright, the effect will be minimal, especially considering that women seeking abortions will be able to travel to neighboring states with more permissive laws.

Ironically, Georgia may be one of the states where the impact is felt more heavily. Per the Guttmacher statistics, Georgia has 15 abortion clinics and a per capita rate of 16.9 abortions per 1,000 women aged 15-44 years, which is slightly higher than the national average. More than a fifth (21.9 percent) of the Peach State’s pregnancies end in abortion.

Georgia also has a fetal heartbeat law that was signed by Brian Kemp in 2019. In other words, Georgia has a relatively high rate of abortion that is poised to be stopped on a dime if the Supreme Court strikes down Roe. What would the effect of suddenly having a lot more babies be?

One obvious consequence would be that the birth rate would increase. Georgia’s birth rate is already above the national average but would be expected to climb as the ability to terminate pregnancies diminished. This is not a bad thing because the US national birth rate has been declining since the 1960s and fell to its lowest point ever in 2021, far below population replacement level. We do need to increase the national birth rate and overturning Roe could help with that.

The flip side is that there are costs associated with having babies and many women choose to abort because they can’t afford the cost of raising a child. Eliminating Roe is not going to magically make parenthood more affordable.

The obvious answer is that it will fall to the state to help pay for the increasing number of children born to low-income families and single parents. In coming years, we may find that welfare programs such as those that provide food, childcare, and healthcare are costing more due to an influx in the number of participants in these programs.

If pro-life advocates are ready to ban abortions, are they also ready to help bear the cost of raising the bumper crop of babies that will soon follow? I certainly hope so.

Additionally, just because a state outlaws abortion doesn’t mean that its citizens won’t get them. Advances in pharmaceutical abortion pills will make it easy to obtain illicit abortifacients on the black market. Failing that, women can take an abortion vacation to a more permissive state.

The question of what comes next also relates to the upcoming elections. Either way, the Court’s ruling was going to throw a hand grenade into the electoral expectations for the midterms and next year’s presidential election.

There will be no shortage of punditry on the electoral effects of the decision, but I think it boils down to a few key points. First, Democrats already have a lock on college-educated women, the demographic most likely to support abortion rights, having won this group by a hefty margin in 2020. Any gains among this group will be marginal. Indeed, almost everyone who favors abortion already votes Democrat.

There are two areas in which overturning Roe could be expected to help the Democrats, however. First, young voters are pro-choice by about a two-to-one margin. These voters also skew Democrat but are notoriously unreliable when it comes to showing up at the polls. Striking down Roe could change that and motivate the young to get out and vote in greater numbers.

Second, the decision could increase engagement and excitement among other Democratic voters. Many of the party faithful have been disappointed with Joe Biden’s inability to get their priorities through Congress and are unhappy with the current inflationary economy. A decision striking down Roe could fire up the Democratic base and inspire them to get to the polls when they might otherwise have stayed home.

The decision may hurt Republicans directly as well. For the Trump era, I’ve heard from many Republicans who were not happy with Trump but who supported him because of his stance on abortion. If the abortion battle goes away at the national level, Republicans will have to find new ways to reach these disaffected non-MAGA voters and keep them in the fold.

Likewise, if the abortion battle shifts to the states, both sides will become more engaged at the local level. This may hurt Republicans because they control most state governments and because most voters oppose abortion bans. Of course, this varies by state and there are many other issues that voters will consider, but emotional topics like abortion have a powerful grip on voters.

Finally, the fallout from the leak will lead to changes at the Supreme Court. It is unacceptable for staffers and clerks to leak details of ongoing decision-making in an attempt to influence the outcome. The Court will need to implement security measures to ensure that this sort of thing doesn’t happen again.

One last question regards the legacy of Donald Trump. I’ve been a critic of Trump since long before he became president so you might wonder if overturning Roe changes my opinion of The Former Guy or his presidency. The short answer is no.

I’ve always said that one of the few bright spots of the Trump Administration was his judicial appointments. One of the reasons that these appointments were good was that Trump kept his promise to pick from Federalist Society recommendations. Left to his own devices, Trump might have appointed his sister or Judge Jeanine. He didn’t, however, and he does deserve credit for that.

The flip side is that any Republican who ran in 2016 would have made similar or even the same Supreme Court appointments. In addition to packing the Court with conservatives, they would have also been competent, honest, and conservative, all qualities that Trump lacked. They would likely have won the 2016 popular vote, expanded Congress, and quite possibly been reelected in 2020. There would certainly have been no insurrection and no Big Lie. Donald Trump’s legacy has to balance the good with the bad. And the bad was very, very bad.

Roe v. Wade has not yet been overturned. We don’t know when it will be or even if it will be. I’m pro-life and from what I’ve read of Alito’s draft opinion, I hope that it is accepted by the Court, but even if the Supremes strike down Roe, abortion won’t go away.

The battle against abortion cannot be won by a judicial decree. Efforts will be required in statehouses around the country, but most of all it will take a grassroots campaign of education and an outpouring of support for worried, poor, expectant mothers. The roots of the abortion problem have to be addressed, not just the clinics that are a symptom.