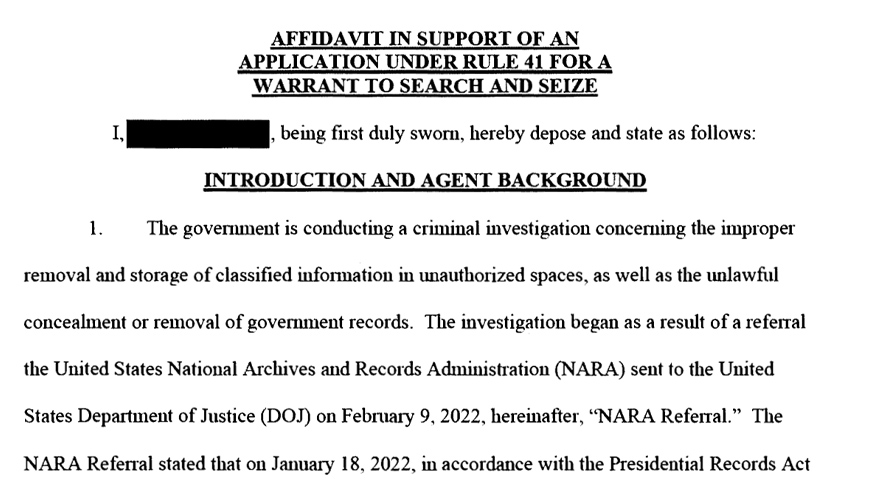 A federal judge in Florida released the DOJ affadivait used to launch an FBI raid at Donald Trump’s home in Mar-a-Lago.

Read the redacted introduction below:

The government is conducting a criminal investigation concerning the improper
removal and storage of classified information in unauthorized spaces, as well as the unlawful concealment or removal of govermnent records. The investigation began as a result of a referral the United States National Archives and Records Administration (NARA) sent to the United States Department of Justice (DOJ) on Febmary 9, 2022, hereinafter, “NARA Referral.” The NARA Referral stated that on January 18, 2022, in accordance with the Presidential Records Act (PRA), NARA received from the office offormer President DONALD J. TRUMP, hereinafter “FPOTUS,” via representatives, fifteen (15) boxes of records, hereinafter, the “FIFTEEN BOXES.” The FIFTEEN BOXES, which had been transpotted from the FPOTUS property at 1100 S Ocean Blvd, Palm Beach, FL 33480, hereinafter, the “PREMISES,” a residence and club known as “Mar-a-Lago,” fmther described in Attachment A, were reported by NARA to contain, among other things, highly classified documents intermingled with other records.