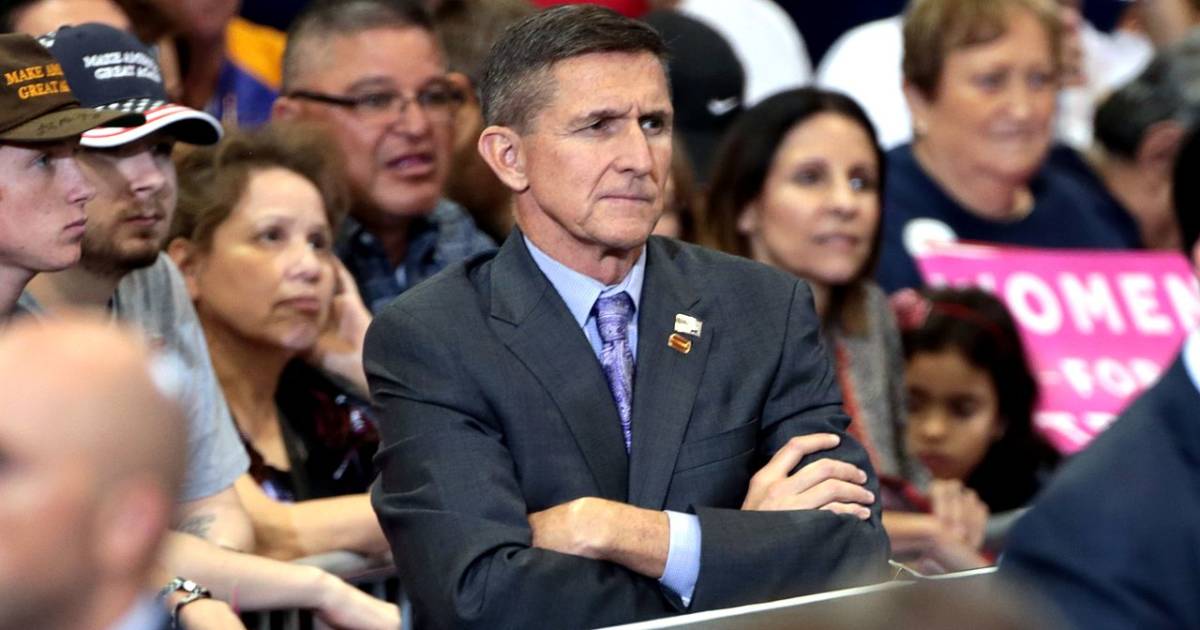 There has been a lot of discussion about democracy and whether the Republican Party is now an anti-democratic organization in addition to being an anti-Democratic organization. The answer varies from person to person, but Mike Flynn reminded us over the weekend that some Republicans really are dangers to our Republic and the Constitution when he advocated a military coup against President Biden.

Flynn’s comment came at what the Washington Times describes as a “right-wing conference in Dallas.” In fact, the “For God & Country Patriot Roundup” is frequently described in other outlets, such as the Dallas Observer, as a QAnon gathering.

The latter description seems to be borne out on the website for the gathering. In addition to the former Gen. Flynn, the speaker list for the conference features Sidney Powell, Lin Wood, Roger Stone’s chief social media strategist from the 2016 presidential campaign, George Papadopolous, and a variety of social media influencers including one who is cited for posting to the “channel ‘Where We Go 1 We Go All’ (currently Logical Faction).” Oh, Allen West and Rep. Louis Gohmert (R-Texas) were there too.

At one point, a self-described “simple Marine” tells Flynn, “I want to know why what happened in Myanmar can’t happen here.”

Flynn’s answer is, “No reason. I mean, it should happen here.”

To be clear, “what happened in Myanmar” was a military coup. Back in April, the country’s military declared a state of emergency and invalidated the results of the election, coincidentally held in November 2020, and detained President Win Myint and State CounsellorAung San Suu Kyi, along with ministers, their deputies, and members of Parliament. In other words, what happened in Myanmar is exactly what the Q devotees have been saying was going to happen in the United States. (Before Trump lost and Biden was inaugurated, the president was not going to be arrested though.)

January 6 was the day it was supposed to happen. If the military and law enforcement officials were going to rise up and, tossing the Constitution aside, arrest Democrats, Mike Pence, celebrities, and who knows who else, the assault on the Capitol would have been the triggering event.

But it didn’t happen. The Capitol Police protected Congress and the vice president and the military showed up to help put down the insurrection, not join it. These facts go a long way toward explaining why some insurrectionists are on video trying to negotiate with the officers while others became very vicious when the police resisted the mob. Many members of the mob expected the police and the army to join them.

And Mike Flynn wants more of the same. This former Army general who swore an oath to “support and defend the Constitution of the United States against all enemies foreign and domestic” is now on record supporting a coup that would overthrow that very same Constitution. That’s because Flynn took a new oath on the Fourth of July last year that seemed to signal his allegiance to Q.

It’s particularly galling that Flynn’s call for a coup came over Memorial Day weekend. Assuming that American soldiers would act to overthrow the president disrespects the memory of the Americans who died over the past 200 years to uphold the rule of the Constitution.

Whatever Flynn’s allegiance, there is a word for members of the US military who would support a coup that would overthrow the duly elected president of the United States and the constitutional process. That word is “traitor.”

I’m not arguing that Flynn should be arrested. As we learned after January 6, the legal bar to convict for incitement is very high. In Flynn’s case, there was no clear and present danger of an immediate coup attempt from Flynn’s words. Our First Amendment rights do allow us to advocate for a coup against the president as long as we don’t advocate immediate action like rallying supporters to march on the White House right now.

But Flynn should be denounced. Constitutionalists and conservatives should stand up and say that there is no room for talk about coups and revolutions in the Republican Party. How hard is it to say that a coup would be bad for America and violate the Constitution? Pretty hard apparently.

It is disappointing but not surprising that few Republicans have criticized Flynn’s statement. In fact, as of this writing, Liz Cheney (R-Wy.) and Adam Kinzinger (R-Ill.) are the only Republicans I’ve seen who have gone on record to say a coup would be bad.

The disgraced former general is popular among Republicans who see him as a martyr and a hero. President Trump’s pardon for the former National Security Advisor was a popular move in the GOP. Now, elected Republicans, those who don’t openly agree with Trump and Flynn, are afraid to speak out against him because they know they will be primaried if they do.

It isn’t clear whether the other speakers at the conference would support a coup. Newsweek reported that Sidney Powell said that Donald Trump “can simply be reinstated” as president.

“And Biden is told to move out of the White House,” Powell added. “And President Trump should be moved back in. I’m sure there’s not going to be credit for time lost, unfortunately. Because the Constitution itself sets the date for inauguration. But he should definitely get the remainder of his term and make the best of it. That’s for sure.”

It also is not clear how Trump would be “reinstated,” who would tell President Biden to “move out of the White House,” or who would enforce such an order. It should go without saying, however, that it is extremely unlikely that Biden would step down voluntarily for either Donald Trump, Kamala Harris, or whoever the Qs might want to install next. What Powell wants would require force, i.e. a coup.

I’m not sure how many Republicans share Mike Flynn’s desire for a coup, but it is definitely too many. These fanciful, dystopian notions should not be humored, but few Republicans want to cross the former president and his cronies.

With all due respect to Erick Erickson, who tweeted a few days ago that “fewer and fewer people” were talking about and believing in QAnon, I think that the movement is still strong and dangerous. We just don’t come into contact with them as much because Twitter and Facebook have purged so many Q accounts. Rather than being on social media, they met in person in Dallas. Further, the fact that a large minority of Republicans is openly advocating for a coup is much more alarming and dangerous than anything the Democrats are doing.

The truth is that it doesn’t take many people to start a war. A few fanatical true believers who think that God is on their side can do a lot of damage. And there seem to be more than a few Q adherents who fit that description. A recent poll found that almost a quarter of Republicans believe in the Q conspiracy.

Republicans have been dancing with the devil since 2015. The party should have shut down Trumpism years ago. The claims of stolen elections were a red line that should have never been crossed. So was January 6.

Yet the majority of Republicans are still afraid to tell their supporters the truth. And largely because of their lack of moral courage, the country is lurching towards more division and violence. Until they find their spines and speak out against the lies about stolen elections and calls for a coup, it will be fair to say that many Republicans are anti-democracy.

It’s easy to understand why Republicans want to forget January 6 and move on, but as any member of a 12-step program can tell you, the first step in dealing with a problem is admitting that you have one. Republicans have not done that yet and the party won’t be able to move on until it deals with people like Mike Flynn.