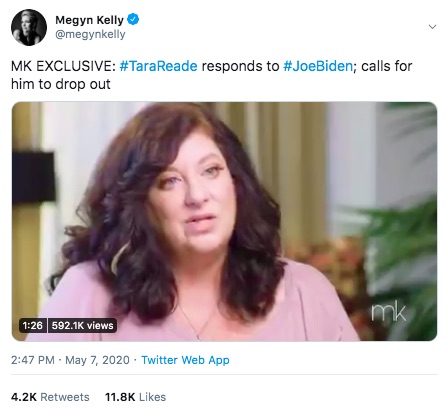 The first long-form, on-camera interview with Tara Reade, who has accused Joe Biden of sexual assault in 1993 when she was an aide in his Senate office, did not go to Fox News, or CNN, or CBS. Instead, it went to one of the biggest stars in the media – who happens to not have be employed by a network at this time.

Megyn Kelly conducted the interview with Reade yesterday, and clips have started emerging today on Kelly’s Twitter, Instagram and YouTube accounts. In them, Reade called on Biden to drop out, and said she stands with Christine Blasey Ford. Significantly more is still to come.

But part of this story is also the fact that Kelly conducted the interview. I talked to Kelly today about how it came about. “I reached out to her last week to see how she’s doing,” she said. “I was not asking for an interview at all. She said she had been trying to reach me. She had been asking other journalists for my number.”

Kelly says Reade specifically wanted her for the interview: “She wanted somebody who was non-partisan, who would ask her tough questions, and who was trauma-informed.”

The interview took place yesterday in California. Rich McHugh, Ronan Farrow’s former producer and the author of the recent Business Insider Reade piece, produced it. “Rich and I have been friends for a couple years,” she said. “I said ‘well why don’t I have him produce this.’ Since Rich was already steeped in the case, and is a great producer.”

“I spent the past two days reading every piece of criticism of her I could find,” said Kelly. “The mainstream left can’t stand this woman. The reaction has been way more vicious than with Christine Blasey Ford.”

By tomorrow, more clips are expected, and a long-form video as well from Kelly. What’s in the interview? Kelly says a lot of news will be made, and viewers will have to make up their own mind once they watch the full interview.

Kelly says this is not about social media hits or trying to make money. She’s servicing unedited clips through a company called TMX to news outlets across the country. “I’m setting myself up to be scooped,” she said. “But I want that because what I want is it to be everywhere.”

Kelly’s message to the media, which has not covered this story nearly as much as they did with Blasey Ford: “Good luck not running the Tara Reade soundbites. This puts networks in a very interesting position. Let’s see them not run it now.”