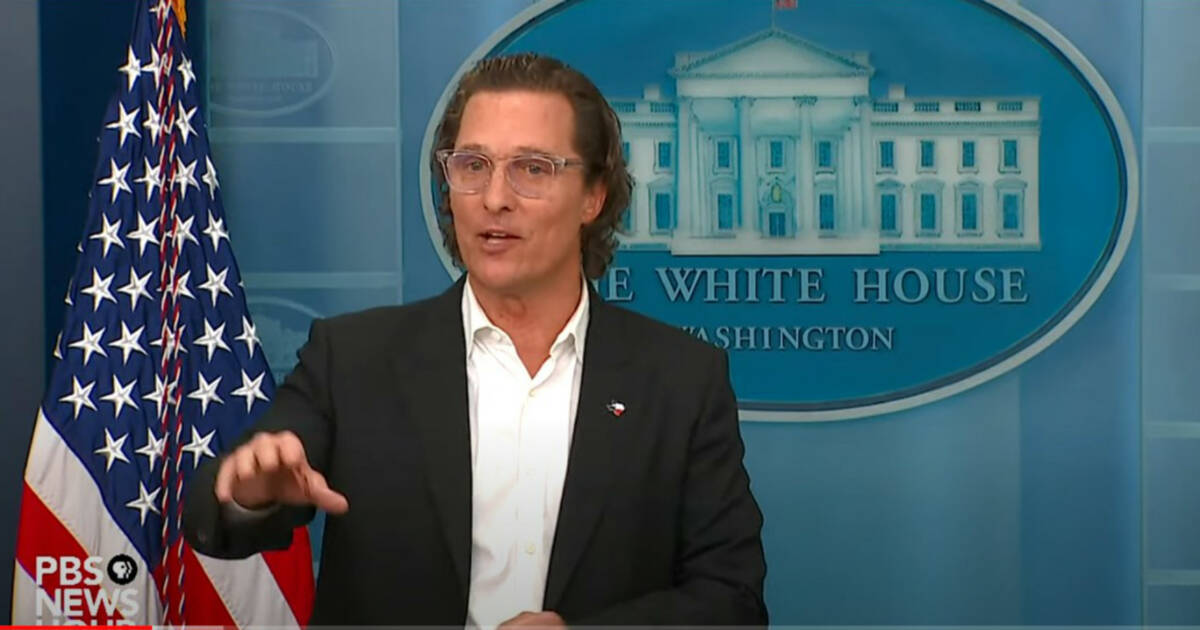 Most of us don’t like it when celebrities insert themselves into political issues… unless they are on our side. True to form, when actor and Uvalde native Matthew McConaughey made a series of recommendations on how to take steps to resolve our crisis of mass shootings, the response was like a political Rorschach test.

Speaking at the White House yesterday after a meeting with President Biden, McConaughey made an emotional call for gun reforms that he believes would help prevent future attacks similar to the one that killed 19 children and two teachers at a school in his hometown.

“Make the loss of these lives matter,” McConaughey said.

Emotion can be a dangerous thing at a time like this. Some emotion is appropriate in such a time of tragedy. Mourning the lost and a desire to prevent future attacks can spur us to make needed changes to address what clearly is a serious problem in modern America.

On the other hand, emotion can also lead us to act irrationally and impulsively at a time when we need to carefully consider the impact of our actions. Sometimes quick, ill-considered action can fail to address the real problem and may even make it worse. This is called the Law of Unintended Consequences.

As H.L. Mencken put it, “Every complex problem has a solution which is simple, direct, plausible — and wrong.”

These types of misdirected solutions are on parade when it comes to the issue of guns.

As I’ve written in the past, we need to take steps to keep guns out of the hands of people who are homicidal, but we need to balance those reforms with our individual constitutional right to bear arms. I think that most people in this country believe that we can find an appropriate middle ground.

To start with, I think we need to reframe the debate around the idea of reforming gun laws rather than instituting more gun control. “Gun control” is a term with deeply negative connotations for gun owners. “Gun reform” would start with the assumption that gun rights for law-abiding citizens are constitutionally protected, but that their accessibility by certain high-risk individuals is what should be controlled.

McConaughey is not an anti-gunner. He does not advocate gun confiscations or repealing the Second Amendment. While I don’t agree with all of McConaughey’s suggestions, they are not radical.

“We need responsible gun ownership,” McConaughey said. “We need background checks. We need to raise the minimum age to purchase an AR-15 rifle to 21. We need a waiting period for those rifles. We need red flag laws and consequences for those who abuse them. These are reasonable, practical, tactical regulations.”

Second, McConaughey suggests raising the minimum age to purchase an AR-15 to 21. Again, this is not a radical idea, although I’m not sure how effective it would be. The data on mass shootings shows that very few such incidents occur in schools. Workplace attacks by adults are far more common. We also know that very few traditional gun crimes are perpetrated with AR-15s. With this strategy, we may impact a lot of prospective gun owners for very little return.

And it’s possible that such a law would be unconstitutional. An Oregon court last year ruled that it was impermissible age discrimination to prohibit pistol sales to people under 21.

There are a couple of caveats in this case. First, the prohibition was the policy of private business, not a law. Second, the case is still winding its way through the legal system. As far as I can tell, no federal or state law setting a minimum age for gun ownership has been struck down on an age discrimination basis.

Third, McConaughey asks for waiting periods. There are two problems here. The first is that a Rand Corporation analysis of gun control methods found evidence that waiting periods could reduce gun suicides and total homicides, but the evidence is inconclusive for mass shootings where shooters often plan their attacks carefully over a long period.

Per the study, waiting periods would be most likely to reduce suicides, the highest share of gun deaths, because such acts are often impulsive responses to a short-lived crisis. Waiting periods could also give law enforcement more time to investigate possible straw purchases and complete background checks.

In fact, Senator Thom Tillis (R-N.C.) told the Wall Street Journal yesterday that extending waiting periods to several weeks for gun buyers under 21 would provide investigators with time to check for juvenile criminal histories among sealed records. This seems to be the best argument for waiting periods with respect to combatting spree killings.

On the other hand, an unintended consequence of waiting periods would be to imperil victims of domestic violence. I don’t know of statistics that detail how many women are attacked or murdered by stalkers or domestic partners while waiting for gun permits, but I do know that these cases are not exactly rare. There can be valid reasons for someone to urgently need a gun for self-protection. The Uvalde massacre provided a reminder that we can’t always depend on police for protection.

A compromise here might be to require waiting periods for the purchase of an AR-15-style rifle, but again, the data shows that pistols are far more likely to be used in spree killings than so-called “assault rifles.” Ultimately, the evidence shows that focusing on weapons rather than shooters is a mistake.

McConaughey’s final suggestion is the implementation of red flag laws, and I believe that this is an area where both parties should be able to agree. Most spree killers share characteristics that include a criminal record, a history of violence, and/or a history of mental illness. It is these factors that we should use to screen out people who should not have a gun or who at least bear much closer inspection.

Red flag laws are not about punishing people before they commit a crime. They are about holding people responsible for past violent and threatening behavior. A good red flag law would include due process for the gun owner to appeal an order removing his guns as well as providing penalties for abusive and fraudulent reports.

I’m not on board with everything that McConaughey suggests, but I do think we need to reform gun laws. Rather than preserving gun rights, maintaining access to guns for homicidal individuals with histories of violent behavior is a threat to the Second Amendment. When voters feel threatened, they will vote for more and more politicians who are hostile to gun rights.

What’s more, those who misrepresent McConaughey’s position as a radical assault on the Second Amendment are being intentionally dishonest. Nowhere in his remarks does McConaughey, a gun owner himself, advocate banning AR-15s or confiscating guns already in private hands. He is not a “gun-grabber.”

McConaughey’s best ideas are red flag laws and continuing to refine and enhance background checks to plug gaps that previous rampage killers have exploited. This won’t stop every shooting spree, but it will make it more difficult for people who are dangerously violent or mentally ill to slip through the cracks.

“Responsible gun owners are fed up with the Second Amendment being abused and hijacked by some deranged individuals,” McConaughey said.