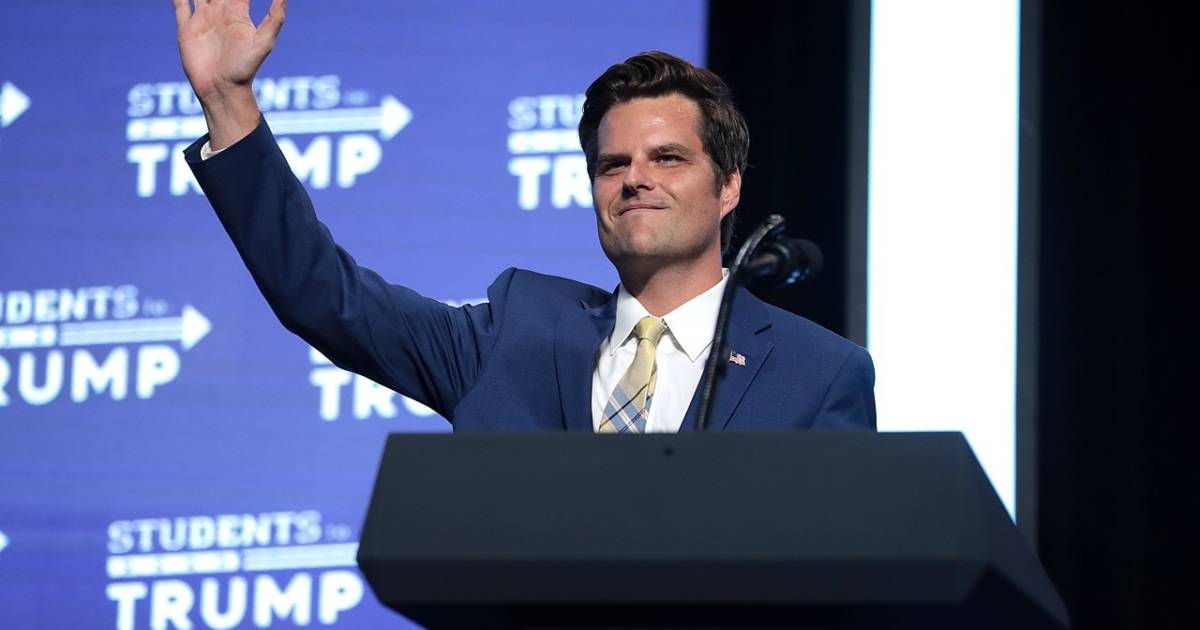 It has been a little more than a month since the bomb was dropped about Rep. Matt Gaetz’s sex scandal. I discussed back in March how Gaetz was linked to Joel Greenberg, a Republican officeholder in Seminole County, Florida, who was arrested on sex trafficking and stalking charges. Gaetz himself was reported to be under investigation by the FBI for the sex trafficking of a 17-year-old girl. Now new details have emerged and things look even worse for the Florida congressman.

Last week, the Daily Beast reported that Greenberg sought help from Roger Stone in obtaining a pardon from then-President Donald Trump. As part of the package requesting the pardon, Greenberg wrote a description of his crimes, which amounts to a signed confession. The resulting document is very incriminating, not only for Greenberg but for Gaetz as well.

Greenberg names names. Actually, he names initials and offices, but the references point straight to Matt Gaetz. After all, there is only one “congressman from Florida’s 1st Congressional District” who hung around with Greenberg and who has the initials “MG.”

Referencing the 17-year-old girl, Greenberg wrote, “On more than one occasion, this individual was involved in sexual activities with several of the other girls, the congressman from Florida’s 1st Congressional District and myself.”

In the documents obtained by the Daily Beast, which include multiple drafts, one of which was handwritten, Greenberg said that he learned that the girl was under Florida’s minimum age of consent through an “anonymous tip” on September 24, 2017.

“Immediately I called the congressman and warned him to stay clear of this person and informed him she was underage,” Greenberg wrote. “He was equally shocked and disturbed by this revelation.”

After learning her age, Greenberg said that he confronted the girl and that, “She apologized and recognized that by lying about her age, she endangered many people. There was no further contact with this individual until after her 18th birthday.”

Other documents reportedly show that Gaetz sent Greenberg $900 by Venmo with the instruction to “hit up” the 17-year-old prior to Greenberg’s warning. Greenberg then paid $900 to the girl and two other women a few hours later.

Transaction records obtained by the Beast show that Greenberg made more than 150 Venmo payments to more than 40 women. The payments were generally between $300 and $500, although some were more than $1,000. Reporters spoke with 12 women who say that they understood that they were being paid at least in part for sex.

Gaetz seems to be adopting the same strategy that many recent politicians have taken when confronted with wrongdoing. He is refusing to budge. Gaetz seems to be operating in a business-as-usual mode and has refused to step down.

Other Republicans are exhibiting the same moral courage that we have seen over the past four years by refusing to comment on the scandal.

And Gaetz, like New York Governor Andrew Cuomo, who has been credibly accused of sexual harassment by numerous women, Virginia Governor Ralph Northam, who appeared in blackface, and President Trump, who was credibly accused of numerous improper and corrupt acts, may survive at least until his term ends. Neither party seems interested in forcing out its own members, no matter how egregious their behavior. Gone are the days when congressmen would fall on their swords and resign when caught in humiliating and unethical behavior.

Greenberg’s story does not end there, however. The Daily Beast’s trove of documents also suggests that Roger Stone was in the business of selling access to President Trump for potential pardons. Several messages indicate that Stone expected $250,000 from Greenberg for facilitating the pardon.

This means that Stone, who himself received a commutation and pardon from President Trump, may be back in hot legal water. There are numerous potential charges, including fraud and bribery, that could stem from selling pardons.

It is doubtful that the trail would lead to more legal problems for Trump, however. So far, the former president has not been directly linked to the matter, Greenberg never received a pardon, and no money seems to have been paid to Stone or Trump.

Nevertheless, the scandal, which Gaetz is prolonging by refusing to go quietly, further tarnishes the Republican Party with allegations of corruption. That may be a problem as the country moves toward the 2022 midterm elections. After all, for most voters, prostitution and the sex trafficking of underage girls is not a traditional family value.