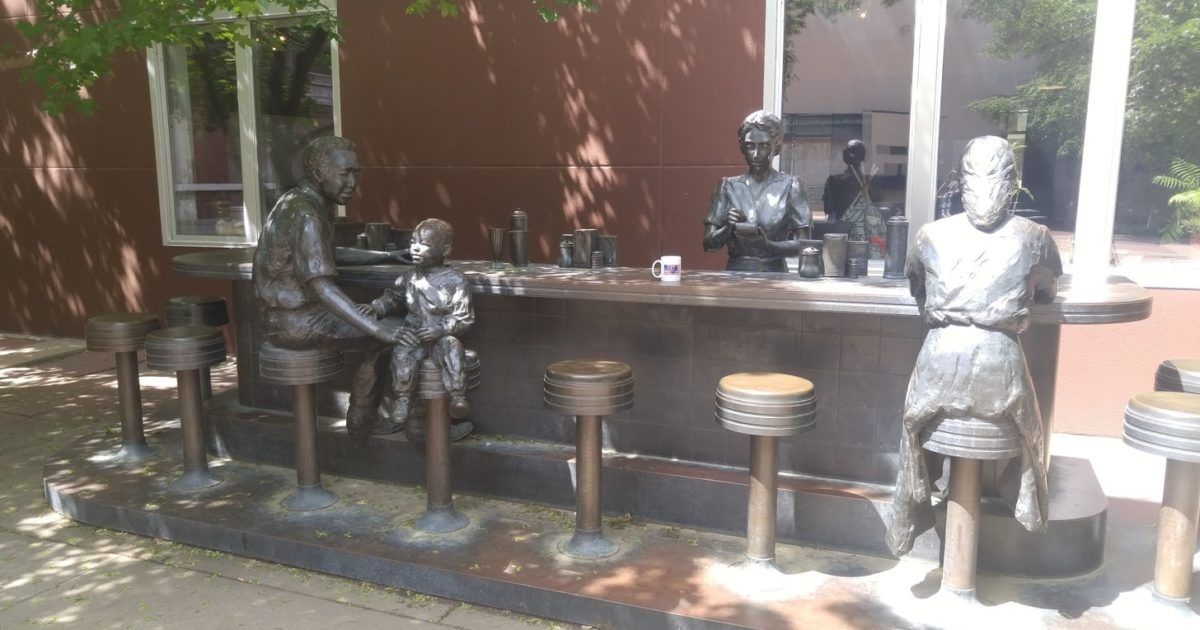 When I think of Martin Luther King and the Civil Rights Era, I think of Wichita, Kansas.

Most of you know that my full-time job is as a pilot. That has given me a great opportunity to travel around the country and see things that I never would have seen otherwise because I would have had no idea to even look for them. That was the case when I was walking in downtown Wichita one day and saw a small lot between two buildings that had a lunch counter populated with statues.

Naturally, I was intrigued so I checked it out. The statues commemorate the lunch counter sit-in at the Dockum Drugstore in 1958. For those who might not know, many restaurants were “whites only” at that point. A popular and peaceful civil disobedience tactic was for black patrons to come in and sit down even though the business would refuse to serve them, often because it was against the law to serve blacks at a whites-only counter. Occupying the space kept paying customers away and put economic leverage on the owners. You can read the full story about the Dockum sit-in here.

Seeing the lunch counter replica was one of the things that made the struggles of the Civil Rights Era come alive for me. Another was visiting the 16th Street Baptist Church in Birmingham where Klansmen planted a bomb that killed four little girls attending Sunday School in 1963.

Looking back on the race relations of the 1950s and 1960s, it’s easy to see that we’ve come a long way. It has been tempting to say that the race problem is resolved, but after the past few years, racial tensions seem to once again be raising their ugly head. From a white guy’s perspective, we sometimes look at affirmative action and equal opportunity laws and say that we’ve done everything that we can to combat racism and that it’s up to them now.

I think that misses the point. I favor a colorblind society and have always liked the U2 lyric, “I believe in the kingdom come when all the colors will bleed into one,” but what we have to realize is that being colorblind doesn’t mean that colors are not there. We may not see them, but that doesn’t mean that they don’t exist.

People of different races often have different experiences in life and those perspectives are something that I, as a white guy, struggle to understand. For example, I typically don’t worry about interacting with police (unless they are driving behind me), but if even someone like Senator Tim Scott (D-S.C.) says that they have problems with latent racism in 21st century America, I have to listen and take that seriously.

As with many things, I think the truth lies somewhere in the middle. It’s pretty clear that we have not totally achieved the colorblind society, but neither are we the blatantly racist nation that we were just a few decades ago. Some people do cry wolf about racism, but that does not mean that racism doesn’t exist.

If you don’t think that racism exists, just take a look around some of the internet chat groups. One thing that I’ve noticed is that there is a default reaction to racial issues that includes bringing up the black crime rate, poverty rate, and problems with family structure.

For example, whenever a black person is killed, the typical response is usually to first look at the person’s criminal record and assume that he or she was up to no good and therefore “had it coming.” That is typically followed by an assertion that more black men are killed by other black men than by whites. Finally, the questions of upbringing and intact families are raised. What this really boils down to is an attempt to absolve the killers. Even people who know and like members of other races can fall victim to this stereotypical thinking.

One of the most egregious cases was Ahmaud Arbery, a 25-year-old black man who was killed a little less than a year ago in Glynn County, Georgia. Arbery was jogging when a group of white residents chased him down and shot him in the street. Originally the shooting was considered justified, but subsequent videos showed that the residents lied to police about what happened and that they had attempted to unlawfully detain Arbery. Their attempt to detain him for questioning was illegal under Georgia’s law regulating citizens’ arrests.

Arbery had past run-ins with the law, but there is no evidence that he had committed a crime that day. A security video purportedly shows Arbery entering a home under construction, but this would not have been illegal under Georgia law since Arbery did not force entry, damage the property, or steal anything from the site. Nevertheless, he was tried and convicted by many in the court of social media, partly on the basis of false claims that the video of the shooting showed that he was wearing work boots and carrying a hammer.

Arbery’s murder is one crime that we can say definitely would not have happened if he had been white. The people who killed Arbery may not have thought of themselves as racists, but the notion that a black man jogging through the neighborhood (in broad daylight) must be a burglar is unequivocally bigoted. Any doubt as to that fact should be removed by Arbery’s killers using a racial slur (you know which one I mean) after the shooting.

What is most disturbing about Arbery’s murder is that they almost got away with it. Arbery died on February 23, 2020, and police and the DA quickly shelved the case. The viral video did not go public until mid-May when it was leaked by one of the killers, who mistakenly thought that it would corroborate his story.

Think about that. If the killer had not leaked his cellphone video of the murder, the legal record would still show that Ahmaud Arbery was a burglar who was shot while resisting a lawful citizens’ arrest. This should bother anyone with an ounce of compassion or a sense of justice.

The incident also makes me wonder how many more cases of justifiable shootings are dramatically different from how they were presented to police. Not every shooting has a video to debunk the perpetrator’s claims. What does that say about crime statistics overall?

I’m skeptical that the incident was an isolated occurrence because a similar situation (without the shooting) became public shortly after the Arbery video went viral. A white woman in Central Park falsely claimed to police in a 911 call that a black man was threatening her. Again, without the video, the story would have had a much different ending.

Most of my political beliefs haven’t changed a lot over the past few decades, but there are exceptions to that rule. If you don’t allow new information to be reflected in your beliefs, you aren’t really thinking or being intellectually honest. So, as I’ve watched the news and the behavior of people on the internet, I’ve come to the conclusion that this racial thing isn’t as settled as I once thought it was.

Martin Luther King Day is a good time to resolve to change that. King’s example of nonviolent change is one that we should continue to follow. It is a powerful testimony to look back on the dogs and water cannons that were turned against peaceful civil rights marchers and know that King still resisted the temptation to return violence for violence and hate for hate.

In the end, King’s nonviolence and love won out. Today, where it still exists racism has been driven underground. Those attitudes are not socially acceptable anymore even if they occasionally bubble to the surface.

I think that King would have known that racism is a human flaw that will never be totally eradicated. Human hearts are inherently flawed and sinful. We have moved in the right direction, however, and we should keep doing so.

I think the best way to do that is for both sides to put ourselves in the other’s shoes. Rather than thinking of what “they should do,” let’s resolve to try to understand how and why those different from us think and react the way they do. When there are incidents, we need to objectively look at the facts and not confuse the forest of statistical big pictures with the trees of each particular case.

The bottom line is to follow the Biblical commandment to love your neighbor, an admonition that applies on the internet as well. If we do that, everything else will fall into place.