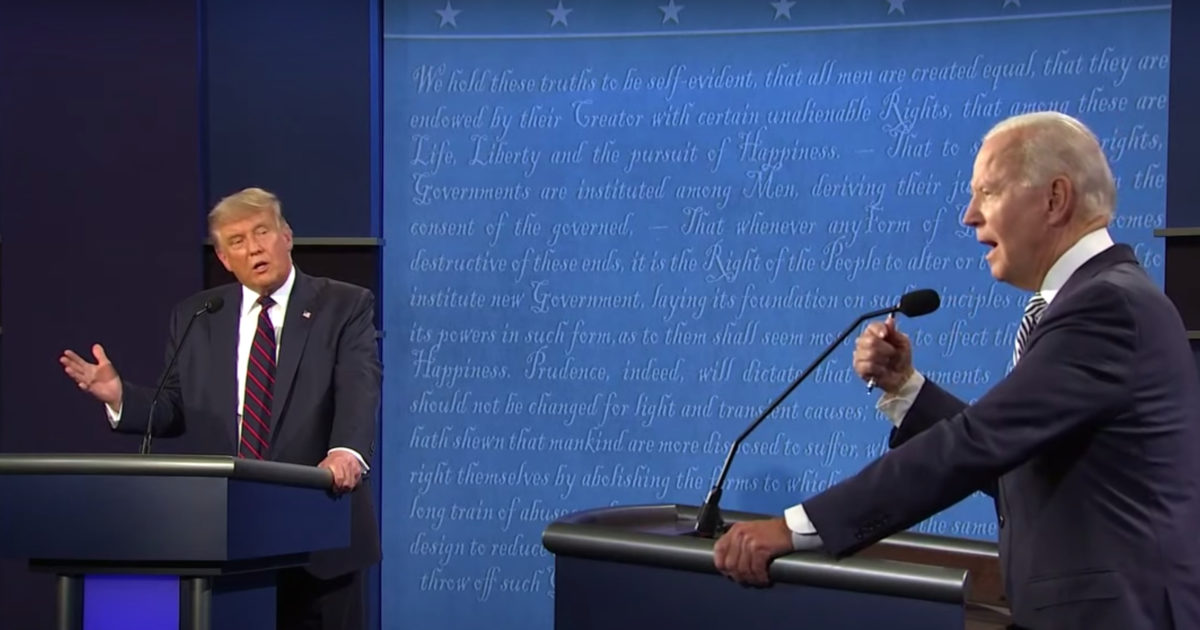 I don’t think anyone was counting on the spirited, intellectual exchange of Abraham Lincoln and Stephen Douglass, or the statesman-like, dignified debate of Daniel Webster and Robert Hayne.

Frankly, I doubt there were many Americans who anticipated the first presidential debate between President Donald Trump and former Vice President Joe Biden would manage to eclipse the intellectual tenor of the “rabbit season, duck season” arguments between Bugs Bunny and Daffy Duck.

Yet somehow, it was worse than expected. So bad that personally, I couldn’t do it. I couldn’t watch two men do their best impersonation of the angry old men in the Muppets gallery hurling insults at one another. For decades now, I’ve felt that these heavily scripted, absurdly choreographed sideshows we call debates are worthless other than providing an opportunity for someone to commit the one unpardonable sin in our culture – being bad on television.

People remember these “debates” because it was “the one where Bush looked at his watch,” or “Bentsen said Quayle was no Jack Kennedy,” or “Gore walked right up to W like he was going to fight him,” or “Trump zinged her by saying she’d be in jail.” Nothing about policy, nothing about America, nothing that matters. And the thought that it would be any different this year was so laughable to me, I didn’t put myself through it. Instead, I watched by proxy. That is, I followed the reaction wave on Twitter.

Doing so allowed me to confirm my assumptions about what was unfolding with the commiserating humor of others, without enduring the personal frustration of being an eyewitness myself to the grudge match:

And while Fox anchor and debate moderator Chris Wallace was harangued for showing bias towards Biden, the folks at Daily Wire seemed to echo the fairly unanimous view that he was a rag doll pitched into a Category 5 hurricane:

Any fleeting hope that substantive issues would be covered by the two-party standard bearers were dashed quickly and completely, leaving more than one commentator desperately craving some kind of discussion of the things that really matter:

And when it had mercifully ended, post-debate analysis gave way to a palpable feeling of shellshock and a surreal acknowledgement of what had just occurred:

Honestly, despite the misery-loves-comedy solace these tweets may bring us, I don’t know how anyone of any political preference, tribe, or philosophy can feel good about what we’ve become. And make no mistake, we get the candidates – and therefore the debates – we deserve.

Perhaps it was fitting that I “watched” the debate unfold on Twitter. Social media superficiality and insults have become the primary way our culture interacts with one another. It really shouldn’t surprise us to see our presidential candidates model the same.