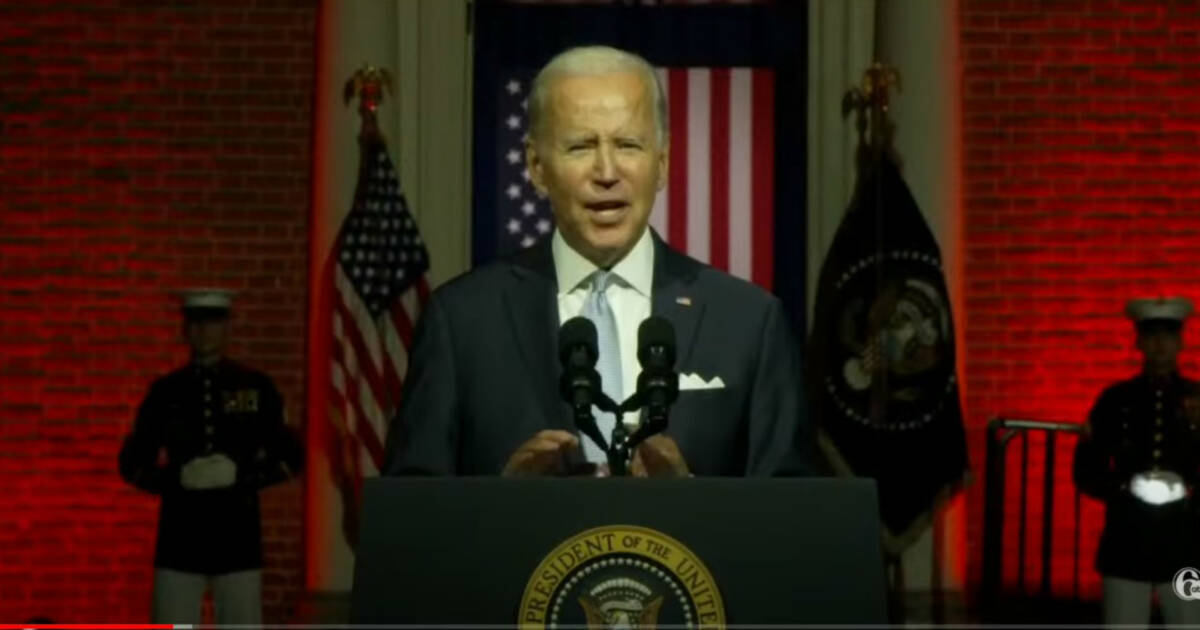 Last night, President Biden delivered a stinging criticism of Donald Trump and the former president’s political ideology. Speaking in Philadelphia at Independence Hall, Biden warned that MAGA Republicans are a danger to American democracy. I think he’s right. In fact, I’ve said the same thing myself on many occasions.

Republicans are quite understandably upset with the president’s speech [full text here or watch it here], but Biden’s words were mostly fair. Over the past few years, we’ve seen Trump and his faction abuse their government authority on countless occasions. Trump’s abuses of power culminated in his attempt to steal the 2020 election by throwing out Electoral College results and the January 6 attack on the Capitol by his supporters. Since then, Republicans have not only refused to hold The Former Guy accountable, they have banded together to try to suppress investigations into Trump’s actions.

Let me counter one criticism as I begin this piece. With all due respect to Steve Berman and others, Biden did not lump all Republicans into one group for a guilt-by-association attack. Instead, Biden consistently used the phrase “MAGA Republicans” to refer to the dangerous faction of the GOP. To say that this was an attack on all Republicans would be to claim that MAGA controls the GOP. Unfortunately, that isn’t too far off the mark.

“But there is no question that the Republican Party today is dominated, driven, and intimidated by Donald Trump and the MAGA Republicans, and that is a threat to this country,” he continued.

I will stipulate that the setting for the speech left a lot to be desired. Flanked by Marines and with red lighting in the background, the stage looked somewhat threatening and dystopian. Since the message was dystopian in its nature, a more nonthreatening setting would have helped to soften the blows that Biden was to deliver.

On another stylistic note, those who watch the full speech may remember one minor flub in Biden’s delivery in 26 minutes. The lack of gaffes undercuts claims that Biden’s mental health is impaired.

“Here, in my view, is what is true,” Biden said. “MAGA Republicans do not respect the Constitution.  They do not believe in the rule of law.  They do not recognize the will of the people. They refuse to accept the results of a free election.  And they’re working right now, as I speak, in state after state to give power to decide elections in America to partisans and cronies, empowering election deniers to undermine democracy itself.”

All this is accurate. But then Biden goes too far.

Some of this is true and some of it isn’t. It is true that MAGA and most Republicans, in general, are pro-life. I’d like to report that there is no opposition to contraception and the right to privacy in the GOP but there is. I am less certain that a majority of Republicans or even MAGA Republicans feel this way, however. It seems like an extreme position within the fringes of both the party and the faction.

Opposition to same-sex marriage has largely evaporated even within the GOP. Trump himself was photographed with a rainbow flag emblazoned with “LGBT for Trump” and supporters have called him “the most pro-gay president in American history.” This doesn’t mean that all Republicans are on board the gay rights train, but it does mean that the situation is more complex than the picture Biden paints.

But what we can say is that Republicans continue to circle the wagons around Donald Trump, and that’s where Biden gets back on track.

They look at the mob that stormed the United States Capitol on January 6th — brutally attacking law enforcement — not as insurrectionists who placed a dagger to the throat of our democracy, but they look at them as patriots.

And they see their MAGA failure to stop a peaceful transfer of power after the 2020 election as preparation for the 2022 and 2024 elections.

They tried everything last time to nullify the votes of 81 million people.  This time, they’re determined to succeed in thwarting the will of the people.

That’s why respected conservatives, like Federal Circuit Court Judge Michael Luttig, has called Trump and the extreme MAGA Republicans, quote, a “clear and present danger” to our democracy.

Again, this is all accurate and a matter of public record.

I agree with Biden’s criticism of MAGA Republicans and I believe that there are way too many MAGA Republicans within the Republican Party. I’ll state again that I’m a conservative who opposes much of Biden’s policy, but I rate MAGA as a more imminent danger to American democracy than progressivism.

Biden’s words needed to be said, but they really needed to come from a Republican. Unfortunately, Republicans have seen what happens to Republicans who speak out against Donald Trump. They know they can survive voting to impeach Trump if they don’t get too vocal about it, but speaking out loud against Trump and MAGA can be hazardous to your political career.

So we end up with people like Lindsey Graham who say that Trumpism isn’t a danger to the country, but who also said on Fox News that “If there is a prosecution of Donald Trump for mishandling classified information after the Clinton debacle, there will be riots in the street.”

Which is it, Senator?

This clip goes right back to Biden’s claim that MAGA politicians “fan the flames of political violence” and use the threat of violence as a “political tool” (which incidentally, is a good description of Lindsey Graham).

MAGA Republicanism is all about elevating one man to power and giving him practically unlimited authority. Whatever American institutions get in their way are attacked. If these institutions can’t be coopted to their purposes, they try to tear them down.

It’s “support the police” unless it happens to be Capitol Police who stand in the way of insurrectionists or the FBI agents who serve a search warrant to collect government documents unlawfully possessed by a former president. It suddenly becomes okay to assault officers and “defund the FBI” if they are at cross purposes to MAGA.

That’s not constitutionalism or conservatism. That’s authoritarianism and a threat to the American Republic.

I have a hard time disagreeing with Biden’s stated view of America as well:

This is a nation that honors our Constitution.  We do not reject it.

This is a nation that believes in the rule of law.  We do not repudiate it.

This is a nation that respects free and fair elections.  We honor the will of the people.  We do not deny it.

And this is a nation that rejects violence as a political tool.  We do not encourage violence.

We are still an America that believes in honesty and decency and respect for others, patriotism, liberty, justice for all, hope, possibilities.

We are still, at our core, a democracy.

This sounds… conservative. Prior to Trump, this could have been a Republican stump speech. Yet now it is seen as an attack on Republicans.

It would be easy for Republicans to prove Joe Biden wrong. Just step away from the Orange Man. Let him fade away. Don’t defend the indefensible. Talk about the economy and student loans instead of Trump. This course would be more likely to help get shaky MAGA candidates across the finish line in several states.

If Republicans weren’t beholden to MAGA, they should just refuse to take the bait. Republicans don’t have to defend former Hillary supporters who were caught red handed with stolen government documents.

Yet they won’t ignore the speech. They can’t help themselves and it proves Biden’s point.