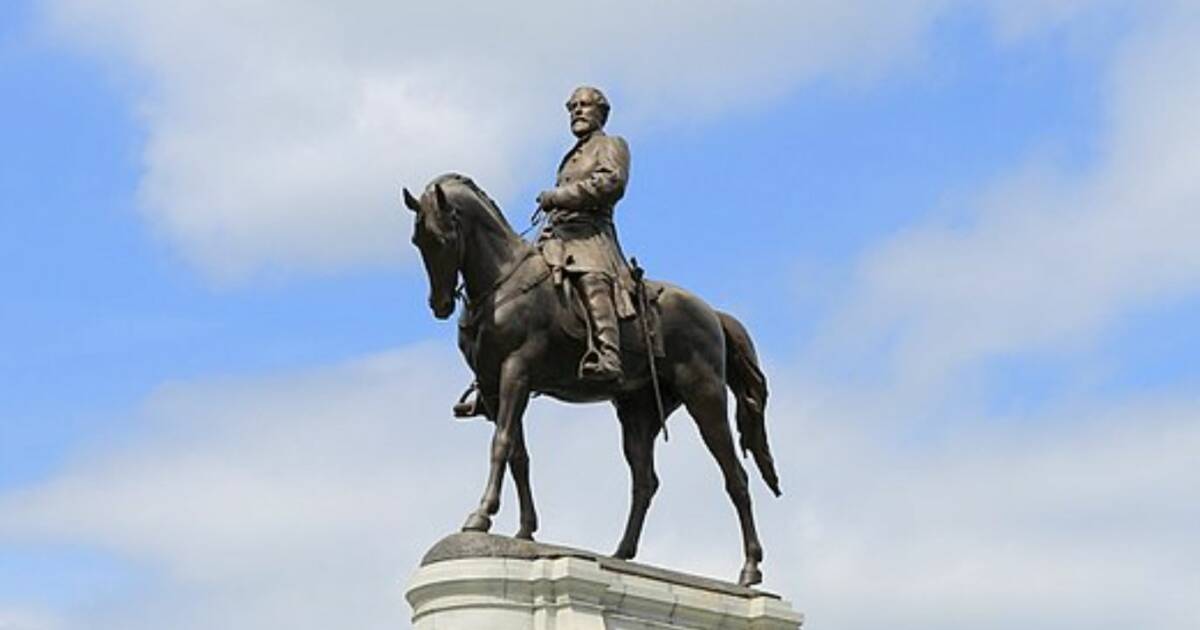 Roe v. Wade was decided in 1973 and the Civil Rights Era is often assumed to have ended in 1968. That puts those two landmark years 48 and 53 years behind us respectively. Yet those events still define our political landscape in many ways.

I often hear my friends on the right say that minorities should just let the past go since Jim Crow and segregation have been consigned to the ash heap of history for more than a half-century at this point. But then you get a week like this week which shows that another event in our shared history that is more than 150 years old can still sharply divide us.

Yesterday, a prominent statue of Gen. Robert E. Lee in Richmond, Virginia was removed. CNN reports that the statue, which has been vandalized in the past, will be placed in secure storage until the state decides what to do with it.

One day earlier, The Hill had reported that a congressionally mandated commission tasked with making recommendations for new names for military bases and ships that were named for Confederate soldiers was seeking public input. The unwieldily-but-accurately named Commission on the Naming of Items of the Department of Defense that Commemorate the Confederate States of America or Any Person Who Served Voluntarily with the Confederate States of America, which is colloquially known as “the Naming Commission,” was created over President Trump’s veto threat.

I’m a native Southerner. A few years ago, I described how my great-grandfather was a Confederate soldier who was captured at the Battle of Spotsylvania and then remanded to “Hell-mira,” the infamous Northern POW camp at Elmira, New York. As a boy, I grew up visiting Civil War battlefields and playing Blue and Gray army games. I’m still a fan of Civil War history and I think that many of the Southern leaders, including Lee, were good men when viewed in the context of their time. It’s easy for me to understand why so many people feel like their heritage is being tromped on when the statues come down.

In terms of heritage, ancestors of Confederates are much farther removed from their kin’s short-lived rebellion than are black Americans from the segregation and racial persecution of their families. Many living Americans can remember unjust racial discrimination personally and not from history books.

But it is not only a question of the heritage of the sons and daughters of the South. The United States has changed a lot in the past 150 years. In many ways, that’s for the best.

The Jim Crow segregation that followed the Civil War was an affront to the Constitution and the lives lost to preserve the Union and free the slaves. It took another hundred years to rectify this wrong, but we were finally able to put this ugly part of our history behind us.

And yes, the Civil War was about slavery. I’ve heard the “state’s rights” argument and I’m somewhat sympathetic to the idea of constitutional overreach by the federal government into areas where the states reserved power for themselves, but the state right in question was the right to slavery. If you doubt this, you need only peruse the Declarations of Causes of the seceding states to see that the Confederates themselves give prominent “reference to the subject of African slavery” in their rationales for leaving the Union. You can argue that the federal government did not have the right to ban slavery (which Lincoln had not done and didn’t believe he had the authority to do), but you cannot make an honest argument that slavery was not the prime issue that stoked the fires of war.

So, the forces that are labeling the Confederates as people who fought a war to preserve a racist institution are not rewriting history. In fact, if anything, the situation is the opposite where the defenders of the Confederacy are whitewashing (pun intended) the legacy of the Southern Lost Cause.

While I don’t doubt that many history buffs fly the Confederate flag for purely sentimental and historical reasons, the fact is that the flag has a much more recent and darker past (and being darker than representing the wrong side in the bloodiest war in American history is no mean feat) as a banner of the Ku Klux Klan during the Civil Rights Era. As Neal Boortz, used to say, if you value the Confederate flag as a banner of Southern heritage, you should have been out there protesting its use by the Klan.

Another way that America has changed in the past 150 years is that we are much more homogenous and less geographically rooted than we used to be. The South is not as white as it used to be and many Southern whites are transplants who don’t feel the connection to the Confederate flag that the old Southern families feel. Even a great many native Southern whites see the flag as a racist symbol rather than a Southern one.

Over the years, my opinion on Confederate monuments has changed and it has been largely because I put myself in the shoes of others. How would I feel when I look at the Confederate flag or statue of a Confederate general if, rather than a Confederate veteran, my great-grandfather had been a slave or a Union soldier? What if my family had come to the US after the war from a country where they had escaped a rigid class system? I can almost guarantee you that, even in the South, there will be more people from an anti-Confederate background than a pro-Confederate one.

I’ve thought for a long time that the disposition of Confederate monuments should be a local issue. I don’t have any problem with the Confederate memorials that dot Southern towns, especially where there are other memorials to the dead of other wars. Statues of Confederate leaders in prominent places are harder to defend.

Removing these monuments isn’t necessarily erasing history. It is more a matter of placing history in its proper perspective. Patriots need to remember that Confederate leaders fought to dissolve the Union and overturn the Constitution, making a mockery of the sentiment of the Founders that “all men are created equal.”

Removing the monuments that laud the leaders of the secessionist movement should also be a reminder that provoking an insurrection when you cannot achieve your aims through the ballot box is not honorable but rather is a bloody, destructive, and ultimately futile business. One that will be judged harshly by history when in the service of an evil cause.

But if a local community decides that its Confederate memorials and statues should be removed, they should not be destroyed. There are many museums where it would be appropriate to display the statue of Gen. Lee where history can be preserved. This should be objective history that reminds us that even good men can make horrible, destructive choices. The history of the Confederates and the Union is not as clear-cut and simple as either side would like to make it.

The problem is a little different for military bases. These federal lands are not subject to local public opinion and are representative of the United States as a whole. As such, these names need to go.

That’s going to cause a lot of consternation. I live near Fort Benning. Its namesake, Henry Benning, wasn’t a particularly good general or statesman, but he was an inveterate secessionist and defender of slavery who was one of the loudest voices in Georgia’s debate over secession. More than a century later, it is inappropriate that many new army recruits train at a base that memorializes a racist traitor.

Changing the base names is not a matter of attacking Southern heritage or erasing history. It is about not honoring men who fought to destroy the country that our current military is sworn to protect and defend. We should be ashamed of some parts of our heritage and fighting a bloody war to preserve slavery is one of them.

These bases should be renamed for unifying American heroes. A suitable replacement name for Fort Benning would be Fort Patton, after Gen. George Patton. Patton was one of the great American generals of World War II, a war where America was unified against racist authoritarians, and a genuine hero. A tidbit of trivia that would be relevant to the name change is that Patton, then commander of the 2nd Armored Division, was stationed at Fort Benning at the outbreak of WWII.

America’s changing demographics likely mean that the days are numbered for many Confederate shrines, but it is unlikely that they will go gentle into the good night. The Republican Party’s core in the deep South, which is represented increasingly by white voters, will make sure of that. In so doing, they will do damage to the GOP’s national brand and further cement the party’s reputation for white nationalism.

It is time to put the Civil War behind us and acknowledge that the Confederates were on the wrong side. In so doing, maybe we will come a little closer to healing the divisions left by segregation as well. Choosing not to defend monuments honoring racists might also help Republicans with minority voters, but ultimately Confederate monuments and names should be removed because it is the right and decent thing to do.