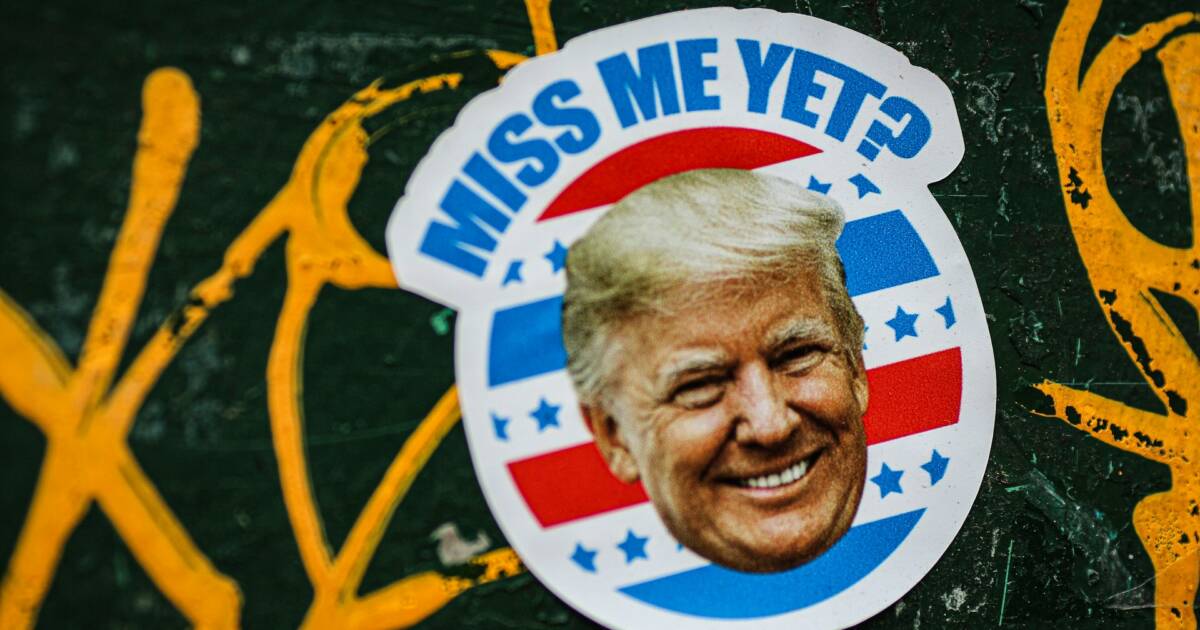 Jonah Goldberg had a piece earlier this week that I finally got around to reading. In the Dispatch article, Jonah asked whether Donald Trump was finally losing his grip on the Republican Party? Citing some telltale signs such as slow ticket sales at Trump events and the failure of some Republicans to flock to Trump’s handpicked candidates, Goldberg thinks that The Former Guy’s influence on the GOP, like the old soldiers of Douglas MacArthur’s famous line, isn’t dying but is just fading away.

Personally, I’m a little skeptical. I’ve heard for about [counting on fingers] six years now that Donald Trump’s days were numbered. So far, those predictions have not come to pass.

Granted Trump did lose the election (and he really did lose it, it was not stolen), but that failed to break his stranglehold on the Republican Party. As we’ve seen since January, the party consistently moves in lockstep to cover up Trump’s actions and protect the former president. If anything, Republicans seem more united against defying Trump now than they were while he was president. Just ask Liz Cheney and Adam Kinzinger who are on the verge of being summarily drummed out of the party.

The first rule of Trump Club is don’t talk bad about Trump.

Goldberg also notes that Trump-backed candidates have not performed well in recent primaries in Pennsylvania and Alabama. The truth is, however, that Trump has never had long coattails. Trump himself fared worse on the ballot than many traditional Republican candidates running alongside him and the list of candidates endorsed by Trump who went on to win their offices is not spectacularly long. His “batting average” on endorsements was only slightly better than 50 percent and often created a backlash that often helped his opponents.

Jonah also posits that Trump’s appeal is becoming more “selective.” Again, I think this has always been the case. With his larger-than-life personality and boastful claims, it is difficult to remember that Trump was not popular among Republicans in 2016. He got the most primary votes of any GOP candidate in history that year, but he also set a record for most votes against him. The party didn’t coalesce around Trump until after the convention and then only grudgingly. And even then, Trump lost the popular vote in 2016 by almost 3 million votes, becoming president on an Electoral College fluke.

The immense and almost cult-like popularity of Trump within the GOP is a more recent phenomenon that developed after he took office. Even that is selective popularity, however, because Republicans are a minority of the country. Trump took office with a 47.8 percent average approval and never saw numbers that high again (although he did see 45.8 percent in April 2020 as the country rallied against the pandemic).

Even though Trump’s popularity has always been selective among voters at large, he has become the dominant force within the Republican Party. A recent Morning Consult poll found that only 39 percent of voters wanted Trump to run again (56 percent were opposed) but 69 percent of Republicans favored a Trump comeback attempt.

This situation mirrors the ground prior to 2020 when many Republicans had misgivings about a Trump re-election campaign. The incumbent was drawing a significant amount of criticism from within the party and there were hints of insurgent campaigns to nominate someone other than Trump. Even though Trump would have probably won anyway, many state Republican Parties blocked other candidates from challenging the president and set the stage for the unpopular incumbent to go down to defeat despite strong party unity.

Many observers don’t believe that Trump will risk yet another humiliating loss by running again. I’m not so sure. Internal polling of battleground states that the Trump camp released last month shows that Trump leading Biden by narrow margins in the states that swung the election in 2020. The same Morning Consult poll that showed voters don’t want Trump to run again also showed that they want to see Biden run again even less. For a person like Trump who is surrounded by yes-men and believes his own press, a 2024 campaign would look like a sure thing.

The ultimate question is going to be how much damage Trump did to himself with his behavior after the election and on January 6. I know a lot of people who were grudging Trump voters in 2020 who said that they would never vote for him again after watching him try to steal the election in broad daylight and then seeing his supporters fly Trump flags over the Capitol as they tried to block certification of the Electoral College votes.

Those people may not vote for Trump in the primaries (if the GOP lets them have another option this time), but will they hold their noses and pull the lever for Trump if he is the nominee? Would the same attempts to tar each and every Democrat as a far-left socialist who is the worst person in the world and who wants to destroy America persuade them again if Donald Trump, the man who incited an insurrection in support of his coup attempt, is the other choice? I’m not so sure they wouldn’t. After all, 2024 is certain to be the latest installment in a long series of most important elections of our lifetime.

I was listening in on some Trump supporters at work recently. They were unanimous that they wanted Trump to run again (“I wouldn’t mind some mean tweets right now”), but they also agreed that Ron DeSantis was their second choice. Goldberg points out that DeSantis has not agreed to bow out if Trump runs, which could make for an interesting, albeit depressing, primary.

I don’t know if Trump will run again. I would not be surprised if he does. I do think that if he wants the nomination, it is his for the taking. I don’t see him fading peacefully into the background. That’s not his style.

I’ve heard way too many predictions that Trump is fading. As much as I’d like it to be true that sanity is returning to the Republican Party, I’m not going to hold my breath.