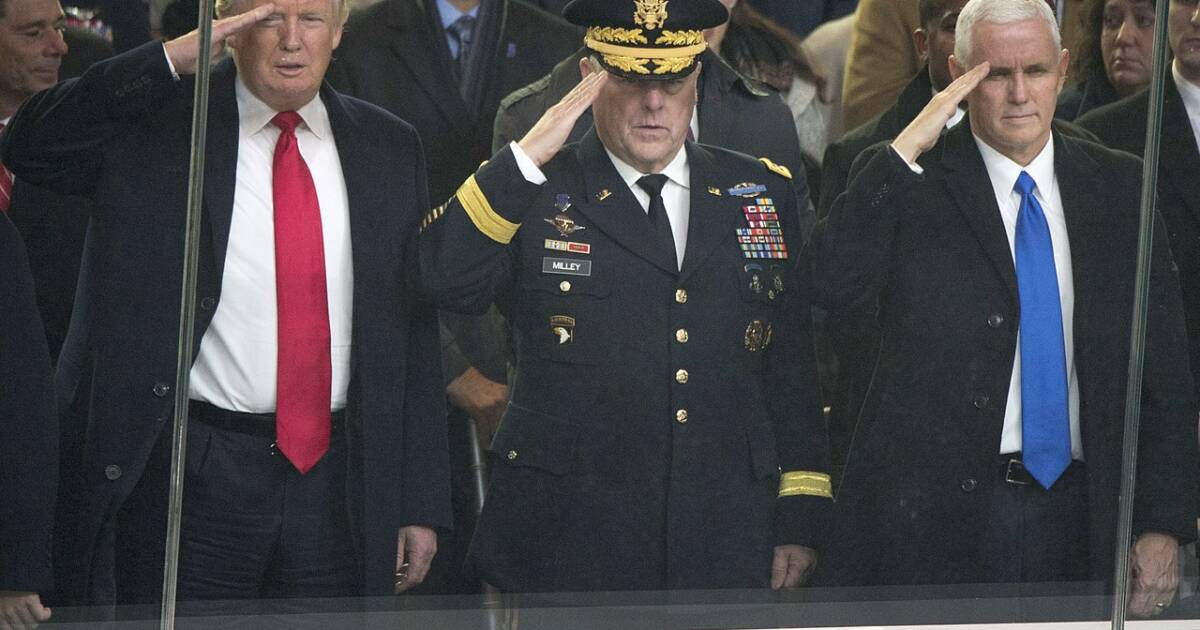 Gen. Mark Milley, the chairman of the Joint Chiefs of Staff, is back in the news. An upcoming Bob Woodward book, “Peril,” details how Gen. Milley made two contacts with his Chinese counterpart, Gen. Li Zuocheng of the People’s Liberation Army, to assure the Chinese that the US was not about to launch an attack. Republicans are seizing on the news to call for Milley’s resignation and some are declaring him a traitor.

Per the report, which is detailed in the Washington Post, one call took place on Oct. 30, 2020, four days before the election, and the other took place on January 8, 2021, two days after the attack on the Capitol. The first call was reportedly prompted by Chinese concerns that the US was preparing to attack, a belief based on President Trump’s anti-Chinese rhetoric and military exercises in the South China Sea.

In Woodward’s retelling, Milley said, “General Li, I want to assure you that the American government is stable and everything is going to be okay. We are not going to attack or conduct any kinetic operations against you.”

Milley allegedly added, “General Li, you and I have known each other for now five years. If we’re going to attack, I’m going to call you ahead of time. It’s not going to be a surprise.”

The second call was due to Chinese concerns about the insurrection. Milley tried to allay Li’s fears, saying, “We are 100 percent steady. Everything’s fine. But democracy can be sloppy sometimes.”

When I read these reports, a couple of questions come to mind. What is the protocol for an officer in Milley’s position? Is this sort of contact normal? Did he do it secretly? What made the Chinese concerned about Trump’s behavior? Did other countries and government officials get the same vibe? And finally, does General Li command a rebel Chinese army? (Obviously, I’m kidding about the last one.)

The Pentagon has pushed back and attempted to answer some of these questions. Col. Dave Butler, Milley’s spokesman, told reporters that the general’s calls were not revealed to Trump but were coordinated with the Department of Defense and other relevant agencies.

“His calls with the Chinese and others in October and January were in keeping with these duties and responsibilities conveying reassurance in order to maintain strategic stability,” Butler said, adding that Milley also spoke with Nancy Pelosi to reassure the Speaker that safeguards were in place to prevent a lame-duck Trump from launching nuclear weapons or attempting to use the military to maintain power.

A report in Politico went further, citing sources who said that Milley asked permission from Defense Secretary Chris Miller before making the call, but it is not specific as to whether this includes both calls. The report also states that Milley briefed Miller’s office after his contact with Gen. Li.

The problem for Pentagon – not to mention Gen. Milley – is that Pentagon credibility is at a pretty low point after the recent revelations about the drone strike in Afghanistan that killed an aid worker and his family rather than ISIS terrorists. It’s not unreasonable to question what military briefers say.

In the call with Pelosi, which took place following the attack on the Capitol by Trump’s supporters, Milley said “there’s not a snowball’s chance in hell this president, or any president can launch nuclear weapons illegally, immorally, unethically without proper certification.”

The Woodward account then goes on to say that Milley “felt no absolute certainty that the military could control or trust Trump” and convened a meeting with military leaders to review nuclear launch procedures. In particular, Milley reminded commanders that he was involved in the launch chain of command as well and that the president did not have sole authority.

This refers back to the question of protocol. A little online research makes me wonder if Gen. Milley’s assertion that he was in the chain of command for a launch was correct. A Harvard article from 2017 discussing American nuclear launch protocols notes, “the secretary of defense does not confirm the president’s decision, nor does he or she have a right to veto it, nor does anyone else have the authority to override the decision. This is what Elaine Scarry has identified as, in effect, a ‘thermonuclear monarchy,’ which gives the US president almost carte blanche command over the nuclear forces.”

In other words, the process would not stop an illegal, unethical, and immoral launch because the president would have the proper certification. If such a launch was to be stopped, it would be put to people like Milley who have to do so at the risk of losing their careers and possibly their lives.

Although the two calls have been lumped together, they seem to be very different. The October call seems to have been of a more routine diplomatic nature. The reason for the first call was explained by a Washington Post reporter who has read Woodward’s entire book in an interview with NPR:

“Milley had reviewed intelligence suggesting that the Chinese believed the US was preparing to attack at that time, and he feared a hair-trigger situation in which there could be miscalculation, or a preemptive strike by China in an attempt to fend this off or get ahead of it.

“And at the time, there were tensions over military exercises in the South China Sea; these tensions were deepened by Trump’s belligerent rhetoric toward China on the campaign trail. So [Milley] tried to assuage these fears by saying the U.S. was stable and was not preparing to lash out at China.”

Milley’s assertion that he would tell Li if the US was going to attack is the strangest thing about the call. To me, that seems to be salesmanship rather than a serious promise to inform the Chinese about any surprise attack.

The January call was different. It’s easy to see why the Chinese were concerned after hordes of rioters and just sacked the Capitol. Nancy Pelosi and many other Americans were concerned as well. The Washington Post quotes Gina Haspel as lamenting, “We are on the way to a right-wing coup.”

Haspel is no liberal squish. She was President Trump’s own pick to head the CIA and a career CIA officer. To reiterate, the woman that Donald Trump appointed to the CIA thought he was launching a coup.

So, what we are left with on the January call is a general who inserted himself into the chain of command with the intention of pre-empting a possible order from President Trump to launch nuclear weapons. I’m going to add here that there is no evidence that Donald Trump planned to or even thought about a nuclear launch. As far as we know.

In normal circumstances, it would be wrong for a general to prepare to intercept a nuclear launch order. However, in this case, the president committed the greater wrong by interfering with the peaceful transfer of power and losing the trust and faith of his commanders. It was the president who was off the reservation.

Milley was playing a bad hand and had the best interests of the United States in mind. The general’s oath was to “defend the Constitution of the United States against all enemies, foreign and domestic,” not to be loyal to the president. Milley’s first loyalty, appropriately, was to the United States, not to a president who has already shown his willingness to flout the Constitution. (As an aside, I’m going to note that many of Trump’s defenders excuse the president’s unconstitutional actions while nitpicking everyone else’s. It seems to be straight out of Saul Alinsky’s rule number four.)

If Trump had ordered an attack in the wake of his election loss or the failure of his Stop the Steal coup attempt, Milley would be considered a hero. As it is, I think Milley should still be considered a hero for doing what he had to do, what was best for America and the rest of the world.

Some people still have faith in Trump. Others don’t believe that The Former Guy would have crossed the line in starting a war in his last days in office. I have learned over the past few years that Trump’s depravity has no bounds. Would Donald Trump, cornered in the White House and a national pariah after the failed insurrection, have taken revenge on the country that rejected him by starting a war? I can’t say that he wouldn’t have.

Most of the people taking the position that Trump would not have launched a rogue war also said that he would accept the results of the election. Ten months later, he still has not.

I remember a memorable piece by Steve Berman from our Resurgent days in which he likened the Trump presidency to a stress test on America’s institutions. Looking at the Milley phone call from that perspective, America held up under the stress test, but something had to give to keep everything from breaking. That “something” was Milley’s decision to insert himself in the chain of command for nuclear strikes. Under other circumstances, the general’s actions would be inappropriate but under these circumstances, it was the right thing to do.

For those who are upset by Gen. Milley’s action, I’m going to suggest that the real problem was not a general who bent the rules but the president who made it necessary. America’s military commanders are generally honorable and trustworthy, the Afghan drone strike notwithstanding. Donald Trump is not.

I’d say that if we don’t want our generals to be put in the position of violating the law or allowing corrupt and vindictive presidents to run rampant, our best bet is not to elect another madman.