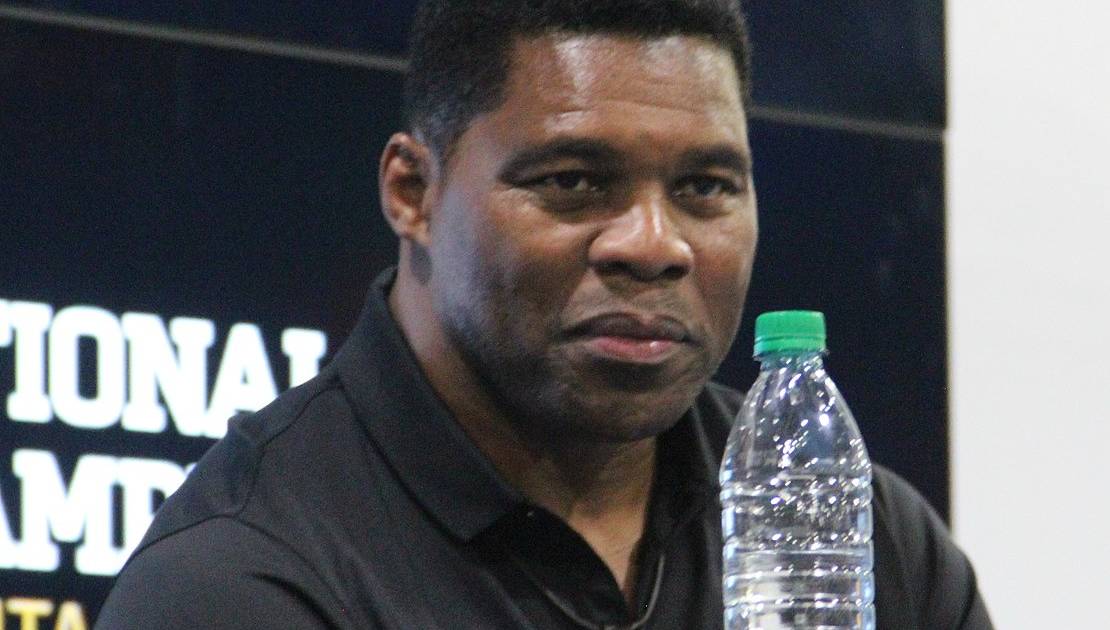 For Georgians of a certain age, Herschel Walker needs no introduction. If you were a University of Georgia football fan in 1980, you will never forget him. That year and several after, I remember #34 flying over the top as he is depicted in the tweet below. Somewhere within my keepsakes, I have a picture of 10-year-old me and my brother posing with Herschel. We were probably two a million kids who stood in awe next to the great running back who was called “Georgia’s air force” for his ability to leap over defenders and land in the end zone.

And it’s just “Herschel.” In Georgia, Walker is one of those celebrities with whom everyone is on a first-name basis. Like Prince, Cher, or Madonna.

Herschel’s last years at UGA never quite measured up to that magical 1980 season. After 1982, he left to play for the now-forgotten New Jersey Generals in the defunct United States Football League. That move turned out to be a short-lived job, but it introduced Herschel to someone who has been a frequent presence in his life ever since. The Generals were owned by none other than Donald Trump.

By 1986, the USFL was out of business and Walker was picked up by the Dallas Cowboys. Over the next decade, he played for the Minnesota Vikings, Philadelphia Eagles, New York Giants, and then returned to the Cowboys before retiring at the end of the 1997 season. Although he ranks fifth on the list of all-time greatest rushers when his USFL and NFL stats are combined, Walker never played for a championship team.

Along the way, Herschel was part of the 1992 Olympic bobsled team, fought in a mixed martial arts competition, and started three businesses that employ about 800 people. Walker was also featured on 2009’s Celebrity Apprentice and Rachael vs. Guy: Celebrity Cook-Off in 2014. More recently, he was appointed by President Trump to co-chair the President’s Council on Sports, Fitness, and Nutrition.

Now Herschel is talking seriously about running against Raphael Warnock, one of Georgia’s newly elected senators. Even though Warnock only took office last January, he was elected in a special election to fill the remainder of Johnny Isakson’s term and has to run again in 2022. Walker, now a staunch Republican and Trump supporter, wants to throw his hat into the ring.

The decision may have already been made. On Tuesday, Donald Trump told two Republican radio hosts that Walker had indicated that he planned to run, saying, “He told me he’s going to, and I think he will.”

In a statement, Walker said, “Georgia is my home — I love Georgia, and I love this country. And I believe we need fighters to step forward and help save both. Know this much: If I run, I’ll be all-in, and we will do whatever it takes to win for Georgia.”

My first question upon hearing about Herschel’s impending candidacy was, “What qualifies him to be a senator?” In this day and age, qualifications seem to be overrated and an afterthought, but Herschel is widely considered to be a very nice man and a smart person. Although he left UGA before graduating to play pro-football, he did finish his bachelor of science degree in criminal justice after his first season with the Generals. As previously noted, he is also a successful businessman and he has a lot of name recognition in Georgia.

The other big question is whether Herschel can win if and when he decides to run. That is far from a sure thing. For starters, I said at the beginning that Herschel needs no introduction for Georgians of a certain age. That age is about 50 and above. For Georgians who are younger or who moved to the Peach State less than 40 years ago, his name recognition won’t be nearly as high.

A problem here is that older Georgians already lean Republican. Herschel would lack name recognition with the younger voters where he needs it most since exit polls show Warnock won every demographic younger than 50 in the January runoff.

Additionally, Herschel apparently does not live in Georgia and hasn’t since about 1983. As of early 2021, Walker was reported to live in Westlake, Texas, although he seems to own several homes, including one in Edina, Minnesota. This may not prevent him from running since Georgia’s guide to qualifications for holding elective office only stipulates that a US senator “must be an inhabitant of the state for which chosen when elected,” but his residency could easily become a campaign issue in both the primary and general elections.

Mental health is another potential problem. In 2008, Herschel revealed that he suffered from Dissociative Identity Disorder and authored a book about his experience with the illness. Even if his illness is under control, it will lead to questions on the campaign trail and voters might well be hesitant to vote for a candidate with a known mental illness.

Walker has been politically active for some time now but would be a novice as a candidate. It isn’t unheard of for novices to win Senate elections on their inaugural campaign, but it isn’t unheard of either. His inexperience would be another liability.

Herschel’s chances also depend heavily on who else decides to run. Aside from the incumbent Raphael Warnock, three Republicans have already declared their intention to run. Of these, Gary Black, Georgia’s agriculture commissioner, is the most prominent. Kelly Loeffler, the underwhelming appointee who lost to Warnock in January, two congressmen, and the speaker of the state House of Representatives are also considering joining the fray. In order to face Warnock, Herschel will have to best several seasoned politicians, including some with years of experience in running for statewide office.

At least as interesting is who is not running for the seat. Gov. Brian Kemp is running for re-election and David Perdue, who lost his seat along with Loeffler, has ruled out another Senate bid after initially filing paperwork. Rep. Doug Collins, who came close to defeating Loeffler in the jungle primary, has also bowed out.

If Herschel survives the Republican primary, victory against Warnock is still not assured. At this point, both the Cook Political Report and Larry Sabato’s Crystal Ball rate the race as leaning Democrat. This is a prediction that can change but underscores the radical shift in Georgia’s political landscape since last year.

Whether Herschel wins the nomination or not, the race is certain to be a close one. The election is likely to focus less on Herschel’s celebrity than on the relative popularity of the Biden Administration and the Republican Party. In the January runoff, Stacey Abrams’s coalition of Democrat voters surged while rural white Republicans stayed home. If Trump’s Republican base doesn’t turn out next year, Warnock could win once again.

A lot will happen over the next year to shape the Georgia race, but it will definitely be one to watch. With or without Herschel Walker.