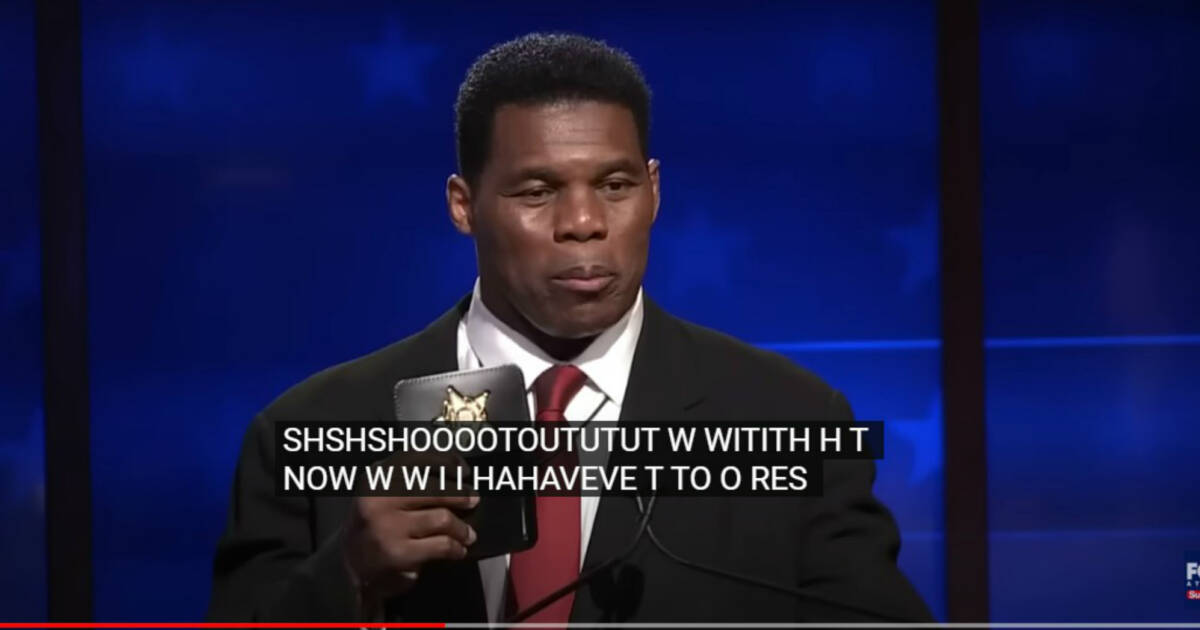 A while back, several of my online friends recommended the 2006 movie, “Idiocracy.” I finally watched it over the summer. It was really funny, but I can’t recommend it without reservation because it was, as my dad would say, “raunchy.” Of course, that was a big part of the movie’s point.

The premise of the movie, which was written by Mike Judge, of “Beavis and Butthead” fame, and Etan Cohen, and which stars Luke Wilson and Maya Rudolph, is that intelligent, responsible people delayed having children and often never had them while people who didn’t give thought to their actions and simply acted on impulse sired children in great numbers. In a low-mortality society, these children who were not well-educated did not face an evolutionary disadvantage.

You might wonder what this movie has to do with Herschel Walker. It isn’t the fact Herschel has four children (that we know of) by different women (in most cases at least).

My point here is that we are forming our own real-life version of the idiocracy. Herschel has no experience in government and many of his soundbites and videos suggest that he does not understand the issues at hand. What’s more, he has a history of mental illness and domestic violence. He claims to oppose abortion yet has allegedly funded the abortions of more of his own children. He has a long history of dishonesty and deception about his education, his businesses, and his family.

(Raphael Warnock has also been accused of domestic violence. His wife accused the current senator of running over her foot with a car during a domestic dispute but police found no evidence to support the claim per Politifact.)

What are Herschel Walker’s qualifications to be a senator? He has only two. One is that he’s a celebrity and the second is that he is endorsed by Donald Trump.

Actually, you can make it three qualifications because Herschel’s lack of understanding about the issues at hand is a plus for his puppet masters. Herschel will vote how he is told to vote and won’t talk back or go off on his own like Susan Collins or Mitt Romney.

The person pulling Herschel’s strings will be Donald Trump so if that’s what you want for a senator then Herschel is your man. For those of us who prefer an ideological conservative, there is no viable candidate in the Georgia Senate race. There is, however, an honest and intelligent choice. (Spoiler alert: It’s not Herschel.)

There is definitely a temptation to overlook Herschel’s personal life because he’s a Republican and will be a reliable vote on Republican policies. The problem there is that this is not your father’s Republican Party. The GOP has shifted a lot in the past few years, probably irrevocably. I would love to see the Republican Party return to its roots as a principled conservative party, but voting for Idiocracy candidates like Herschel won’t get us there.

Think about what happens if Herschel wins. If Georgia votes Herschel in, it won’t be just a six-year commitment. The Republican Party establishment will be firmly in Herschel’s camp as an incumbent running for re-election. There won’t be a sane, qualified conservative opposing him. It will be yet another case of It’s The Most Important Election Ever and Herschel Must Win to Save Us from The Democrats. We’ll be right back where we started.

The only thing that can make the Republican establishment break with candidates these days is if the candidate speaks ill of the Republican Party. Madison Cawthorn and Liz Cheney are case studies in being abandoned by the party while Matt Gaetz and Marjorie Taylor Greene are feted despite their buffoonery.

We know this is true because we just lived it… and we’re about to live it again. When Donald Trump won the nomination in 2016, we were urged to support him because the Democrat alternative was so bad. We did and then Trump corrupted the whole party. The Republican establishment locked out primary challengers in 2020 and Trump was anointed with the blessing of the unopposed. He will be back in 2024 and Republicans will flock to him again. Mark my words.

Yet Donald Trump is the cause of this mess. If Trump had never been elected, we wouldn’t be dealing with candidates like Herschel and Dr. Oz. We’d have stronger Republican candidates, conservatives with political experience, instead of celebrities. And they’d be winning.

I’d like to see a return to the strong, conservative Republican candidates of the past. As I’ve said in previous elections, however, we aren’t going to get better Republican candidates if we keep voting for the bad ones that the party nominates. It isn’t true that the worst Republican is better than the best Democrat, but that’s what the tribal leaders want you to believe.

What’s more, it’s less true now than it used to be with the MAGA faction steering Republican policy away from constitutionalism and conservatism on many fronts. While I continue to oppose the Democrats on many cultural issues, I part ways with MAGA Republicans on issues like stealing elections for Republican presidents, resistance to raising the debt ceiling, their desire to grow government for their own ends, and support for Ukraine.

When I posted these ideas online, the main theme of Herschel’s apologists was that character doesn’t really matter as long as he votes the way we want. “The end justifies the means” was never a conservative argument, and anyway, I not only believe that character matters, but I also don’t think a MAGA supporter like Herschel would vote in line with my limited government, constitutionalist beliefs. None of the pro-Herschel arguments impress me. They all boil down to tribalism.

The tribalism is so strong that it is breeding an Idiocracy of unqualified politicians. The irony is that much of the impetus for this new raunchy Idiocratic world comes from Christian voters who have been convinced that Trump and Herschel are God’s anointed despite their sordid pasts and their current tendency to tell falsehoods. For those who need a refresher, the ninth commandment means that lying is a sin.

Last week in early voting, I voted for Raphael Warnock and the status quo with the hope that Republicans can get their act together in the next six years (or in four years when Jon Ossoff faces re-election or in two years when it’s Joe Biden’s turn). Right now, I’m not optimistic.

But I’m not a Democrat either. I voted for Brian Kemp and Brad Raffensperger at the same time that I voted for Warnock. I foresee a lot of split-ticket voting in my future.

Let me know you’re listening! If you read this, hit me up on Twitter and let me know what you think!