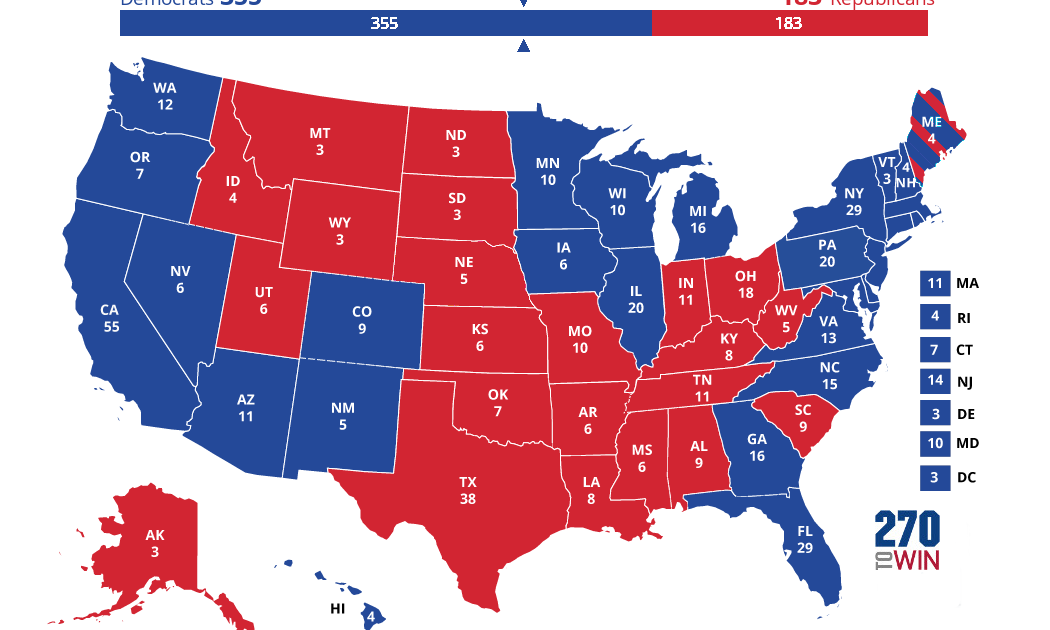 We are a week away from Election Day and the debates are over. There is little time left for the race to swing and few opportunities for candidates to change the current trends. With that in mind, let’s take another deep dive into the Electoral College to see how the presidential race is shaping up.

Looking at the national polls, we see that Joe Biden retains a healthy lead over Donald Trump. Currently, Biden has a nine-point lead in the FiveThirtyEight average. Biden’s lead narrowed slightly over the past two weeks, coinciding with the breaking of the Hunter Biden laptop story, but now Biden seems to be surging again. Even with the alleged corruption story at the forefront of the news, Trump never led in the polling average and Biden now averages 51 percent support.

But the real race is in the swing states, so let’s look at them individually. For these numbers, I’m primarily relying on FiveThirtyEight but I’m also looking at the Real Clear Politics polling average.

What we are presented with is a picture of a near-sweep of the swing states by Joe Biden. Even worse for Donald Trump, as I’ve noted in the past, is that several red states (Georgia, Iowa, and Texas) have slipped into battleground status. Still worse, Biden holds narrow leads in two of these states.

It is also worth pointing out that Biden is now polling at 50 percent or above in five of the battleground states (Colorado, Michigan, Minnesota, Pennsylvania, and Wisconsin). Three of these are the states where Donald Trump’s surprise victories in 2016 propelled him to the presidency. Pollsters have paid more attention to these states this year, however, and Democratic margins are much greater than they were in the last cycle with one exception.

In Wisconsin, Biden’s six-point lead is similar to Hillary Clinton’s lead in 2016. That year, Hillary’s 6.5-point polling lead turned into a 0.7-point Trump victory, a swing of 7.2 points. Such a swing is possible this year but unlikely since more pollsters are surveying Wisconsin and have taken the 2016 failure to sample enough non-college-educated white voters into account.

In the other two decisive states from 2016, Michigan and Pennsylvania, Biden’s lead is much greater than Hillary’s. In Michigan, Hillary led by 3.4 points while she held a 1.9-point lead in Pennsylvania. This year, Biden leads by eight and five points respectively.

If we put everything together and plug it into the Electoral College map, we find Biden in landslide territory. Giving Biden credit for every state where he is leading, he would win the Electoral College by a 355-183 margin. If Texas and Iowa fall into the Biden column, the outcome could be as lopsided as 411-127.

Statistically, it is unlikely that Biden would win every toss-up state where he leads, however. On a good night, Republicans might hold Arizona, Georgia, Florida, and North Carolina. Anything else would be a very long shot. This scenario still leaves Biden the victor by a 284-254 margin.

Time and opportunity for Donald Trump to shift the course of the race are slipping away. At this point, FiveThirtyEight gives Joe Biden a 92 percent of winning the Electoral College (compared to 72 percent for Hillary Clinton in 2016).

Of course, this does not mean that Donald Trump cannot win, but the odds against him are much longer than in 2016. Could the polls be wrong again? Will the race abruptly tighten as it did in 2016? I’ll look at the chances of such a swing next time.