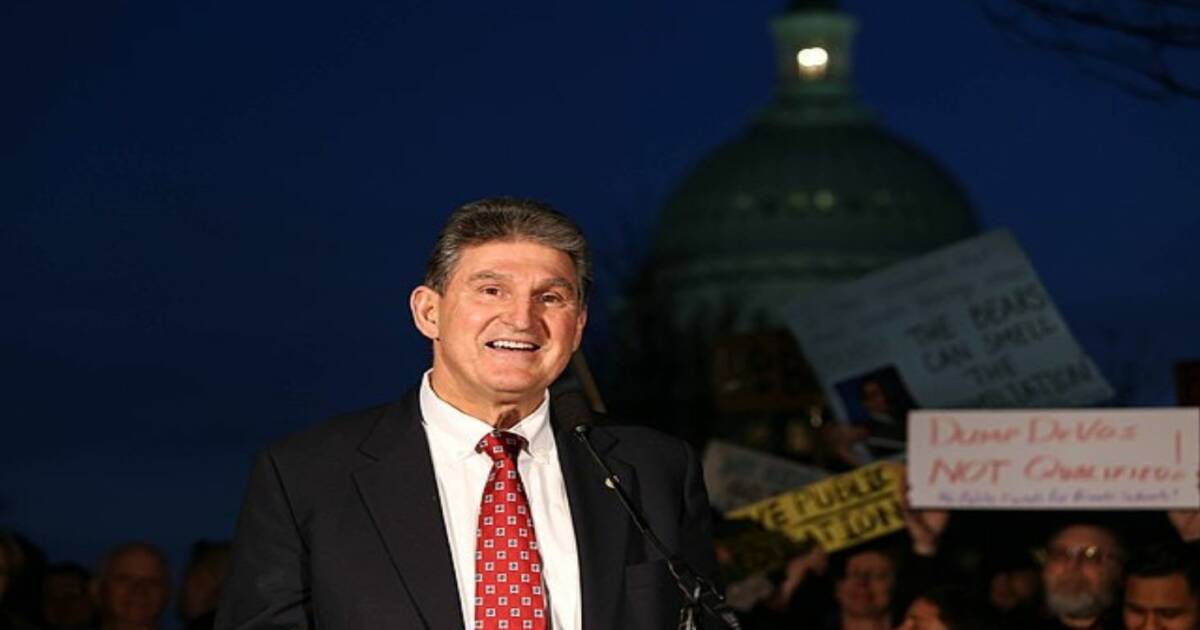 Going into 2022 and 2024, the Democrats have at least two things going for them. The first is the fact that the Republicans have embraced their crazies and the second is Joe Manchin. In the coming election cycles, it may take both of these advantages to preserve the Democratic majority, especially if Joe Biden’s popularity continues to decline.

As we saw in 2020, Republican craziness and bad behavior don’t give Democrats an automatic win. As the election neared, Democrats started talking about expanding the Supreme Court, massive spending projects, and a “woke” agenda seemed to spook voters and narrowed Democratic chances of taking Congress. If it had not been for Donald Trump’s war on the election driving up Democratic turnout in Georgia (while suppressing the Republican vote), the Democrats would have lost the Senate.

As go into 2022, Joe Manchin could be likened to a rudder on the ship of the Democratic Party. If you don’t like him, he could be considered an anchor.

Manchin, a conservative Democrat in a red state, can’t afford to go all-in on Democratic progressivism. I don’t know what Manchin’s true convictions are, but it is almost axiomatic that any politician’s most cherished principle is that his job must be protected. I do believe that Manchin shares that conviction.

The West Virginia senator’s latest escapade is putting the brakes on the Democrats’ “human infrastructure” bill. Manchin demanded a “strategic pause” in an op-ed in the Wall Street Journal titled “Why I Won’t Support Spending Another $3.5 Trillion.” In the piece, he added the qualifier, “without greater clarity about why Congress chooses to ignore the serious effects inflation and debt have on existing government programs.”

Whatever his reasons, Manchin has raised the ire of the progressive wing of the party. While many on the left think that Manchin, along with the other half of the Dynamic Democratic Duo, Kyrsten Sinema, are killing their chances in the upcoming elections, it is more likely that the opposite is true.

Both parties have a problem in that they cater too much to their radical fringes. The assumption by the wingnuts is that the majority of the country agrees with them. After all, everyone on Twitter and Facebook and probably even in their personal circles believes the same things they do. Therefore, why wouldn’t the majority of the voters just love the most extreme package that can be rammed through Congress?

You can look back through history and see both parties making the same mistake. When the Democrats took both houses of Congress and the White House in 2008, they promptly pushed through several pieces of unpopular legislation that included the stimulus, the Affordable Care Act, and the Dodd-Frank financial reform. These bills passed mostly along party lines at a time when the Democrats held a supermajority in the Senate and their unpopularity figured prominently in the Republican wave of 2010.

The Republicans were no better. When the GOP finally cobbled together control of all three branches of government in 2016, their focus was on a reform/replace attempt to gut Obamacare, tax reform, tightening immigration laws, and building a border wall. Some of these policies became law and some did not, but they were all unpopular outside the GOP.

In the last years of the Trump Administration, the president, like Barack Obama before him, focused on preaching to the choir rather than making converts. However, Trump’s fundamental problem was that he started with a smaller base than Obama, having lost the popular vote in 2016. It was almost impossible for Trump to win an election based on turning out his base. While Trump did find lots of new voters, even more new voters flocked to the Democrats, fueled by Trump’s erratic and offensive behavior.

While Barack Obama won re-election, his tendency to pursue partisan policies rather than reach across the aisle hobbled his second term. Republicans took both the House and the Senate, which limited Obama to Executive Orders. This further deepened the partisan divide.

Despite running as a moderate, Joe Biden has followed the pattern of edging toward extremism once in office. Biden’s COVID relief bill was popular, but again, was a mostly partisan vote. The infrastructure bills will be his next big legislative test.

It has been a while since I wrote about the infrastructure bill, but the package cleared a Senate vote after 19 Republicans crossed the aisle. Ironically, it is now the progressive left that threatens the passage of the bill.

Almost, but not quite. Because the Democrats have a Senate majority, they only need 51 votes to pass the human infrastructure bill as part of a budget resolution. But without Joe Manchin and/or Kyrsten Sinema, the Democrats don’t have the 51 votes they need.

The Democrats have the same problem that the Republicans had under Trump. If they go too far toward the fringe, they lose moderates at the center like Manchin and Sinema. If they move too far to the center, they lose the progressives on the fringe. It’s a delicate balancing act.

There is a third way, however. Some of the lost progressive votes can be replaced with Republicans if Democratic leaders reach across the aisle. This approach comes with some problems of its own, however.

The progressive left doesn’t like it when Democrats reach out to Republicans any more than the Republican right likes “RINOs.” The push from the left is to get everything they can before they lose their majority.

The rub is that Democrats don’t have to lose power, at least not right away. If they don’t push too hard to the left and anger voters, it isn’t impossible that they could hang on to their majority for a few cycles rather than losing it only two years in. However, if the progressive left gets its way, laws like the human infrastructure bill could make warnings about losing the majority become a self-fulfilling prophecy.

However, Joe Manchin might help the Democrats to break this cycle. The West Virginia senator may be able to throw a roadblock in front of the most radical of the progressive wishes and, in the process, keep the party from angering and frightening the moderate and independent voters that decide elections.

It’s a catch-22 that both parties face. Do they go for quick, radical change, knowing that doing so will invigorate the opposition, or play toward the middle in an attempt to keep their majority, hoping that long-term control of Congress will yield larger results? In recent years, both parties have elected to shoot for the moon, pander to the base, and hope for the best with varying results.

But there’s another factor that Democrats need to consider this time. Even after his 2020 loss and his reprehensible attempt to steal the election by having his supporters interfere with the Electoral College, the Republicans are still stuck on Trump. I’ll be pleasantly surprised if The Former Guy doesn’t make a comeback attempt in 2024.

Democrats made the mistake of underestimating Trump once before. For the good of the country, they should not repeat that error.

If Joe Manchin can keep the Democratic Party from veering too far left, he may also be instrumental in sparing America from a second Trump Administration. That is a possibility that Democrats should keep in mind as they seek to bend Manchin to their will.

Preliminary results are in on the California recall election. At this point, it appears that Gavin Newsom easily survived the attempt to kick him out of the governor’s mansion.

The current tally on the Secretary of State website shows that recall proponents trail opponents by more than 2.5 million votes. On a percentage basis, the vote stands at 36.1 for to 63.9 percent against. As I wrote yesterday, it wasn’t close.

The ballot requested that all voters select a replacement candidate for governor regardless of how they voted on the recall question. In that portion of the election, Larry Elder handily led the pack with 46.9 percent of the vote. No other candidate reached double digits, but this discrepancy is explained by the fact that Democrats went all-in on saying no to the recall and did not rally behind a Plan B candidate.