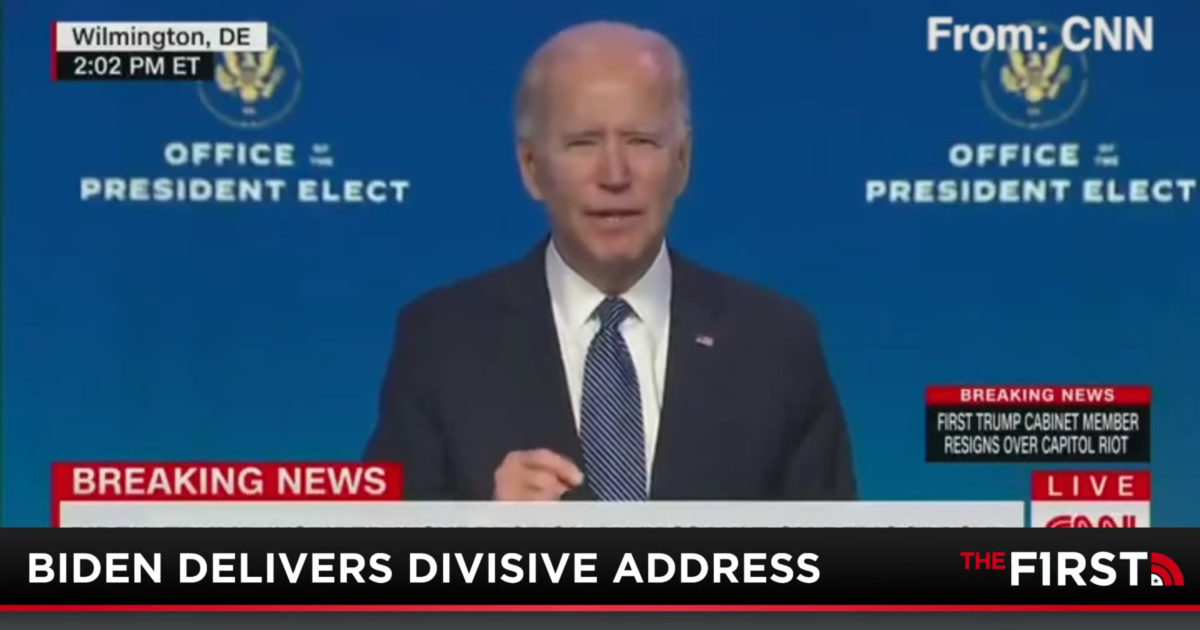 Over the course of the presidential campaign, I noticed something interesting: Conservatives who were opposed to President Trump’s reelection always managed to justify their stance by claiming that Joe Biden was at least a moderate Democrat and not a far leftist like Bernie Sanders or AOC or Elizabeth Warren.  Some even went so far as to use the phrase that Biden would “govern from the radical center.”

The entire time that they were throwing this idea around, however, I couldn’t help but think that this was just a theory with no basis in reality.  After all, Joe Biden and his campaign were notoriously tight lipped about what their policy positions were.  So he certainly didn’t give any such indication. Furthermore, when he did speak, he bragged about his liberal credentials on several occasions.  In one instance, he stated that if he fully implements his agenda, he would probably go down as the most progressive president in history.  This was one of the few coherent sentences he was able to string together during his campaign.

Another problem I had with the idea of Biden’s centrism was his nearly five-decade long record in politics.  If you examined this record, you would notice that he had never been a great leader or innovator in ideas and policies.  He had always been the type to stick his finger in the wind and go whichever direction the Democratic party was moving.  And in that time, the party had always moved steadily to the left; sometimes slowly, sometimes quickly.  Let’s remember, he even beat Obama to the punch when it came to endorsing gay marriage.  There was no indication that this tendency of his would change once in the Oval Office.

Now, with the inauguration finally upon us and with two months of laying the groundwork for his administration behind him, Joe Biden is proving what my college philosophy professor used to say: nothing makes wreck of theory like reality.

In this case the theory among never-Trump Conservatives that Biden would be a centrist is running aground on the jagged rocks that is the reality of his liberalism.

There are three ways that Biden has showed us his liberalism over the past two months.  The first of these is the policy positions he has taken.  Just this morning, as I was scrolling through the news on my phone, I ran across a story from the AP that Biden plans to propose an eight-year citizenship path for immigrants on day one of his administration.  Of course, the internals of the article reveal that it is illegal immigrants that are the focus of this plan.

To put it bluntly, this is an amnesty plan that Biden would be proposing and it has long been at or near the top of the Democrats wish list.  This plan would dump more than 10 million voters into the country who would most assuredly proceed to vote Democrat and render the Republicans to minority party status in Washington and many state capitols for a decade or more.  Compounding this, indications are that enforcement of immigration policies at the border will be far more lax under Biden than they are under Trump.

Other liberal policies that Biden has gotten behind are rejoining disastrous international agreements from the Obama Administration, including the Paris Climate agreement (which would raise energy prices) and the Iran nuclear deal (detrimental to the national security of both the U.S. and Israel).  Biden has also stated that he plans to end the Keystone XL Pipeline on day one which would destroy thousands of American jobs and return us to dependence on foreign oil and the endless foreign wars that go hand-in-hand with that dependence.  And, as part of his proposed Covid stimulus package, he is pushing for the $15 minimum wage that would kill jobs for those already in the low-income bracket and raise consumer prices across the board.

Secondly, Biden has shown us his liberalism in who he has appointed to his advisory roles and nominated for his cabinet.  Of course, this list would be too long to include every name, but it should begin with who he picked as his running mate and vice-president Kamala Harris.  As a Democrat from California, she had been the most liberal member of the Senate and was among the most hysterical in the Democrat’s opposition to even the most reasonable Trump nominees to office.  During her short and disastrous campaign for the Democrat nomination, she defaulted to the most liberal position she could on every issue, including advocating for the elimination of private insurance in favor of a total government takeover of the industry.  Now, she will be riding shotgun in the Biden administration and (presumably) be his top advisor on every issue.

Additionally, Biden has nominated Janet Yellen as Treasury Secretary.  As a long-time fixture of Washington economic policy, she has advocated for strong government activity in the nation’s economic affairs.  Even this week, she is on Capitol Hill advocating that congress “go big” on economic stimulus in order to help struggling Americans.  This is opposed to the conservative approach of ending lockdowns and letting Americans get back to work. and engaging in more organic economic activity instead of the artificial activity of government stimulus.

For Secretary of Energy, Biden has picked former Michigan Governor Jennifer Granholm.  During her term as governor, her excessive taxes and regulations nearly killed the state.  Now, Biden thinks that her failures make for the perfect resume and she will be ideal in helping the big three automakers in Detroit transition from gas powered cars to electric vehicles.

Also in Biden’s list of appointees and nominees are liberal veterans of the Obama Administration such as John Kerry who was Secretary of State and will now be the Special Presidential Envoy for Climate, and Susan Rice who blamed the infamous Benghazi attack on a YouTube video and will now run the White House Domestic Policy Council.

While some of the most hardcore liberals may have been clamoring for the likes of Bernie Sanders and Elizabeth Warren to be appointed to the cabinet, the fact is the appointees we have are more than liberal enough.  They will work toward the economic and energy and foreign policy agendas of the left and have shown no signs of moderation in any of these areas.  And that will have disastrous results.

Finally, Biden has shown his liberalism in his inability to stand up to the more extreme leanings of his party during the tense transition period.  No where has this been more apparent than in the latest impeachment push.  Less than a day after certifying the electoral college vote, Democrats in Congress began pushing to impeach Trump a second time.  This time for incitement of insurrection.  Like the first impeachment, this one was based on completely Trumped up charges (pun intended).  Their claims were that Trump incited the security breach of the U.S. Capitol and therefore is guilty.  This is largely based on an after-the-fact-therefore-because-of-the-fact logical fallacy and there is even now some doubt about whether or not it was after the fact.

Perhaps the Democratic view is best summed up by Congressman Hakeem Jeffries, who said in the mere two hours of debate the House gave to this impeachment “hearing”: “Donald Trump is a living, breathing impeachable offense.”  In his attempt at rhetorical flair, the Congressman inadvertently told all of America what the real issue was.  It was not incitement of insurrection.  That is ridiculous and not supported by the facts.  Their real beef is with Donald Trump as a person and what he has stood for over the last four years.  This beef extends to Trump supporters who (presumably) will continue to fight the good fight after Biden is sworn in.

All of this was driven by the hardcore left of the Democratic party.  At no point did Biden step in to present a cooler head and try to bring a sense of moderation to the issue.  Instead, he stood by as the House plowed ahead with their impeachment without any hearings or presentation of any evidence.  And to those arguing that there wasn’t time for such things because of the impending change of administration, I would ask if that same logic applies to the Senate trial?  As it stands now, it appears that the Senate is going to take up the case after Biden takes office.  So, if that time constraint doesn’t apply to the trial in the Senate, why did it apply in the House proceedings?  The answer is, it didn’t.  The House rushed the impeachment through for purely partisan reasons.  And Biden watched it happen without a word of moderation.

No one who has watched Joe Biden over the years should be surprised at his liberal tendencies.  Nor should they be surprised at his inability to stand up to the more extreme elements of the Democratic Party.  This is expected.  What I will be interested to see over the next few years is the rationalizations that the conservatives who voted for him will employ as they’re confronted by the reality of what they supported.  Will they feign surprise?  Will they try to argue that his liberal policies are, in fact, moderate?  Will they try to argue that his heavy-handed economic policies and his amnesty for illegals and his open border policies and his appeasement of Iran are still better than the Trump alternative?  Probably there will be a combination of all of these and more.  At the very least, it should be interesting.