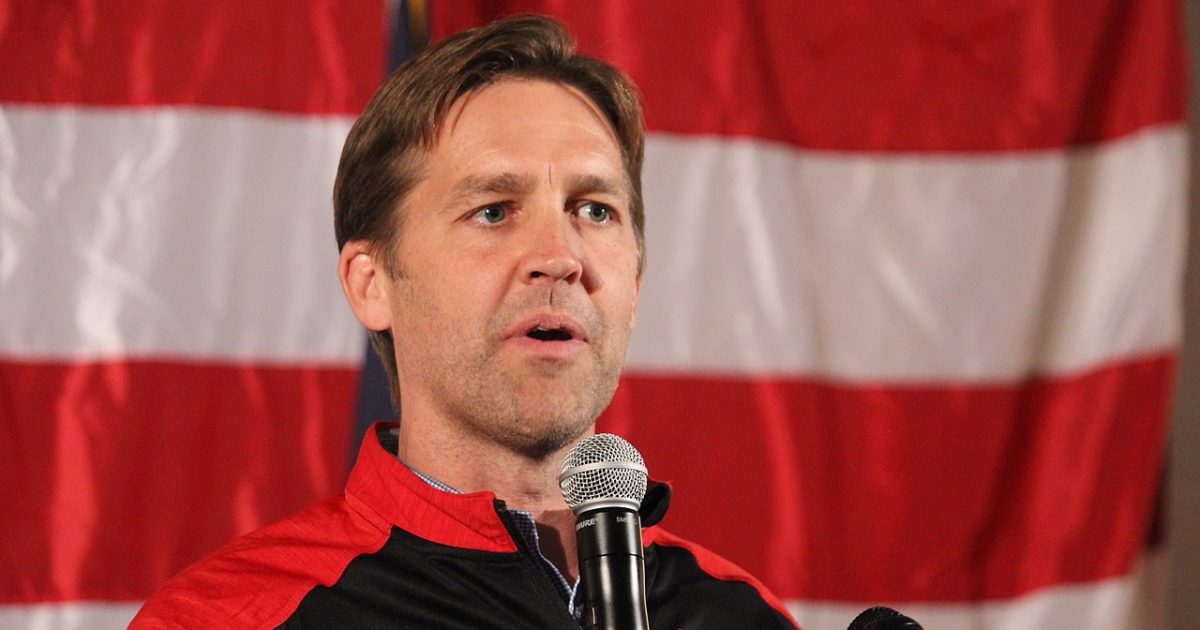 In a sign of things to come, Nebraska Republican Ben Sasse let President Trump have it with both barrels this week. Senator Sasse spoke truths rarely voiced by Republicans for the past four years in a phone call with constituents earlier this week, but, as the president sinks in the polls, Sasse’s criticism may become more common as vulnerable Republican incumbents attempt to save (and distance) themselves.

Sasse, who was an outspoken critic of Trump earlier in his presidency, was responding to a constituent who asked, “Why do you have to criticize him [President Trump] so much?”

Sasse began by responding, “We should distinguish between policy agreement and policy disagreement and then also long-term political implications as well.”

Sasse said that he had worked hard to develop a good relationship with Trump and then touted areas where “the president has now adopted traditionally Republican positions that he used to reject, for the majority of his life, when he was funding Democratic candidates.” In particular, Sasse said that Trump has nominated very good judges.

“There are a lot of places where he and I differ as well,” Sasse continued, “And these aren’t mere policy issues, and I’m not at all apologetic for having fought for my values against his in places where I think his are deficient, not just for a Republican but for an American.”

“The way he kisses dictator’s butts, the way he ignores that the Uighurs are in literal concentration camps in Xinjiang right now, he hasn’t lifted a finger on behalf of the Hong Kongers,” Sasse went on. “I mean he and I have a very different foreign policy. It isn’t just that he fails to lead our allies, it’s that the United States now regularly sells out our allies under his leadership. The way he treats women and spends like a drunken sailor. I criticized President Obama for that kind of spending, I criticize President Trump for it as well.”

Shifting to the president’s personal traits, Sasse said, “He mocks evangelicals behind closed doors. His family has treated the presidency like a business opportunity. He has flirted with white supremacists.”

Sasse then addressed Trump’s response to the Coronavirus pandemic. “At the beginning of the COVID crisis, he refused to treat it seriously,” Sasse charged. “For months, he treated it like a newscycle by newscycle PR crisis rather than a multi-year public health challenge, which is what it is.”

“Now, in his partial defense here, I think that lots of the news media has pretended that COVID is literally the first public health crisis ever and somehow it’s Donald Trump’s fault, that’s not true,” he qualified, “But the reality is that he careened from curb to curb. First, he ignored COVID and then he went into full economic shutdown mode. He was the one who said that 10 to 14 days of shutdown would fix this, and that was always wrong.”

Sasse also said that he thought Trump would ultimately drive the country further to the left. President Trump erred when he mistook an electoral fluke for a broad popular mandate.

“I think folks have regularly misunderstood the meaning of 2016,” Sasse said. “Donald Trump didn’t win the presidency because America actually wants more reality tv around the clock…. I think the overwhelming reason that Trump won in 2016 was because Hillary Clinton was literally the most unpopular candidate in the history of polling.”

“It has always been imprudent for our party to try to tie itself to a Trumpian brand and that’s what I’ve been worried about for five years,” Sasse said.

Sasse fretted, “I’m worried that if President Trump loses, which looks likely, that he’s going to take the Senate down with him,” adding that he is concerned about the possible loss of the filibuster and its effect on religious liberty and free speech.”

“I’m looking at the possibility of a Republican bloodbath in the Senate and that’s why I’ve never been on the Trump train,” Sasse said.

Sasse takes a long view, speculating that court-packing could lead to “dozens of people on the Supreme Court,” that our allies in the Pacific will side with China “because Trump’s isolationism is so weak” that our allies doubt us, that “young people [will] become permanent Democrats because they’ve just been repulsed by the obsessive of our politics,” and that women will leave the Republican Party permanently.

“What the heck were any of us thinking that selling a tv-obsessed narcissistic individual to the American people was a good idea?” Sasse asked rhetorically. “It was not a good idea.”

Can I get an amen?

Sasse makes many of the same points that I have made over the past five years. That includes earlier this week when I decided to support Joe Biden for president and Republican candidates for Congress. What Sasse says is what many prominent Republicans must have known all along. I am glad to hear Senator Sasse speaking out about Donald Trump’s flaws, but, for this election, it is too little too late. The Republicans are about to lose both the White House and the Senate to a blue tsunami.

I sympathize with Sasse’s fears about Democratic control of the presidency and both houses of Congress, but the time to sound a warning against Donald Trump was years ago, not two weeks before the election. If more Republicans had spoken out against Trump’s excesses, if they had done their constitutional duty and removed him from office last January, then we would be looking at a completely different campaign.

If Donald Trump was not at the top of the Republican ticket, Mike Pence would not be making inane comments and retweeting conspiracy theories. A Pence-Biden debate would have had a completely different outcome than the disastrous Trump-Biden debate. Republican incumbents in Congress would not be shackled to a sinking ship. If Mike Pence was the nominee, I and many other disaffected conservatives would have voted Republican rather than Democrat or third party.

Whose fault is the looming Republican electoral disaster? Ultimately, it is Donald Trump’s fault, but Republicans in Congress also deserve a large share of the blame. The GOP promised to hold Trump’s feet to the fire and then proceeded to let him run amok, circling their wagons to protect him from accountability. The Republican Party even protected Trump from primary challenges by canceling many state primaries, ensuring that their deeply flawed candidate would be the standard bearer, no matter how unpopular he was.

In 2016, the Republican embrace of Trump was a matter of necessity to defeat Hillary Clinton. In 2020, the party had a choice and knowingly, purposely, eagerly hitched itself to the man who half the country wanted removed from office only nine months ago. A man who 52 percent of voters said they would never vote for even before the pandemic.

Ben Sasse’s criticism of Trump is honest and refreshing, but it comes too late. The Republican Party is about to face losses of historic proportions because Republican voters have lived in a pro-Trump bubble for the past four years and been in denial about Trump’s widespread unpopularity, aided by congressional Republicans and pro-Republican pundits on television and radio.

If more Republicans had demonstrated the moral courage of Democrats who united to stand against Bernie Sanders, things might have been different, but, sadly, we will never know. America and the Republican Party are about to pay the price for the Republican failure to stand up for the principles that they professed before Trump came down the escalator.