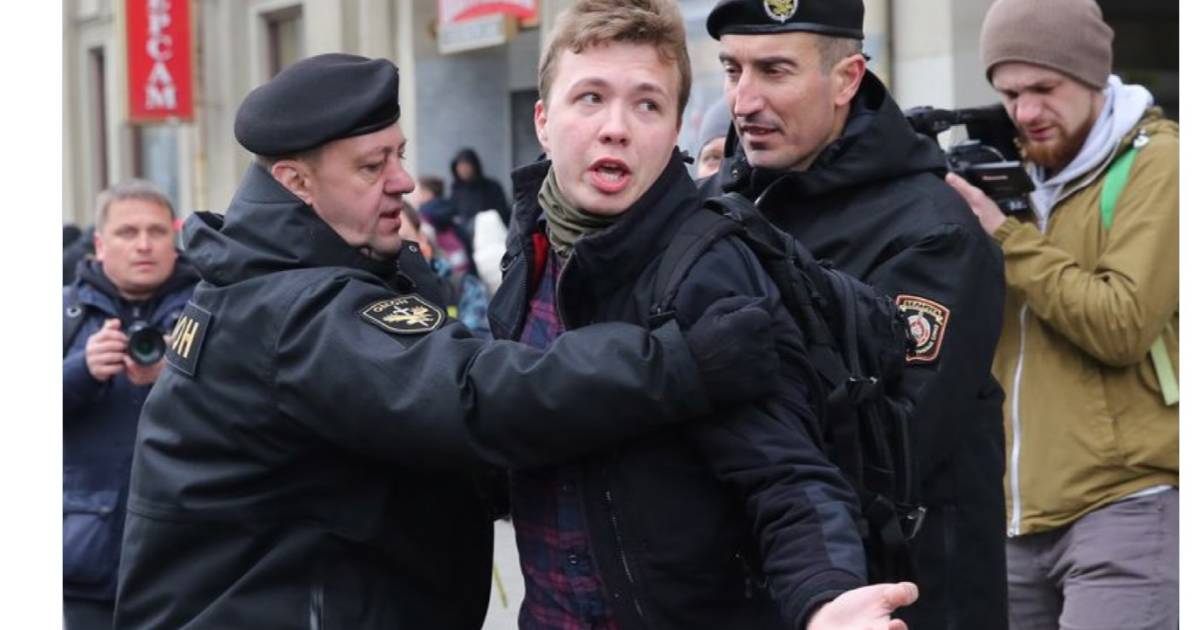 I’m an avid reader and quite a few years back, I read a novel by John J. Nance that described an attempt by international authorities to arrest a former American president for alleged war crimes as he traveled through Europe on an airliner. Truth can be stranger than fiction and Nance’s scenario played out in the real world yesterday as a Belorussian MiG-29 jet fighter forced an airliner down so that authorities could arrest a journalist critical of the regime.

Raman Pratasevich, a vocal critic of the regime of Alexander Lukashenko, was on board Ryanair flight 4978 from Athens, Greece to Vilnius, Lithuania when it suddenly made a sharp turn to the east and landed in Minsk instead. CNN reports that after the plane landed. Pratasevich was arrested. About seven hours later, the plane departed Minsk one passenger short.

Exactly why the plane diverted is the subject of debate. Belorussian authorities claim that the crew made a precautionary landing in Minsk after being notified of a bomb threat. Ryanair claims the plane was “notified by Belarus ATC [air traffic control] of a potential security threat on board and were instructed to divert to the nearest airport, Minsk.” Both sides agree that Belorus dispatched a Mig-29 to escort the airliner to Minsk, although Belorus claims that the jet fighter was present to monitor the situation and assist if necessary.

There is doubt about the Belorussian version of the story, however. Minsk was not the nearest airport when the diversion took place. It would have been faster and simpler to land at Vilnius, the planned destination, than to divert to Minsk, as the flight map below shows.

Witnesses on the plane told DW.com that Pratasevich became visibly upset when the airplane turned toward Minsk and told other passengers that “the death penalty” awaited him in Belorus. On the ground in Minsk, soldiers deplaned the passengers and dog teams checked the baggage. Pratasevich’s luggage was opened and the contents were thrown onto the pavement. The journalist was then arrested and taken away by soldiers. Photos on Twitter show black-uniformed soldiers leading Pratasevich away.

Alexander Lukashenko, the president of Belarus, a former Soviet republic in eastern Europe, has been in office since 1994. Since he took office, Lukashenko has extended the presidential term and delayed elections. The last candidate to oppose Lukashenko is in exile in Lithuania. As a founding member of the Commonwealth of Independent States (CIS), Belorus has close relations with Putin’s Russia.

Intercepting an international airline flight to arrest a political opponent is unprecedented as far as I can tell. The only incident that I can recall that is remotely similar was in 1985 when US Navy F-14 Tomcats intercepted an Egyptair 737 that was carrying four terrorists who had hijacked the Achille Lauro cruise ship and killed an American citizen, Leon Klinghoffer. Mohammed Abbas, a Palestine Liberation Front member, and several PLO officials were also on the plane. The Navy fighters forced the airliner down at a NATO airbase in Sicily and turned the terrorists over to Italian authorities.

Lukashenko’s actions are violations of international law and the Chicago Convention on International Civil Aviation which guarantees the right to overfly countries without landing. Forcing down an airliner with a jet fighter to arrest a passenger is a naked act of air piracy and kidnapping.

If Lukashenko’s actions are allowed to go unchallenged, it might very well be the end of international air travel as we know it as the Saudi murder of Jamal Khashoggi may have inspired Lukashenko. If one dictator can pull off such a brazen act, others will certainly try. Passengers with political enemies would have to consider how close their flights would be to countries where they were persona non grata. Airlines might have to screen passenger manifests for controversial passengers that could provoke an interception. Ultimately, attempts to intercept and divert airliners could lead to shooting on either small or large scales.

Although the United States is not directly involved in the incident, both political parties seem to be united in opposition to Lukashenko’s shocking action. Julie Fisher, President Biden’s new ambassador to Belorus called the interception “dangerous and abhorrent” in a tweet.

What the West can do to punish Lukashenko is the question. Sanctions are an obvious answer, but may be of limited use since most of Belarus’s trade is with Russia. This is especially true since the US, Canada, and Europe have already targeted the country and many of its officials with sanctions and asset freezes in retaliation for the regime rigging an election last year. The good news is most countries that aren’t Russia are lining up to demand an explanation from Lukashenko.

Whatever happens in the coming days, the world should hold Lukashenko responsible for the safety of Raman Pratasevich. If the journalist is not released unharmed, Lukashenko and Belarus should be isolated and impoverished. Doing so may require further isolating Russia as well.

In the US, we take many things for granted. Safe air travel and freedom from arrest for political reasons are two big ones. It’s difficult for most of us to fully comprehend how a flight of an hour or two across Europe, Asia, or Africa can cross a number of dictatorial regimes and even run the risk of being shot down like Malaysia Airlines Flight 17 in 2014. We complain about the other party, but in reality, we know we don’t have to worry about being arrested, tortured, and murdered for our political views.

Alexander Lukashenko’s decision to risk the lives of almost 200 Ryanair passengers and crew to arrest a political opponent is a reminder that there are still very bad and dangerous people in the world who will push the boundaries of international law to the brink of war in order to ensure the survival of their regime. Sometimes a backwater dictator’s actions are so blatant and dangerous that they cannot be ignored by the world.

This is one of those times.