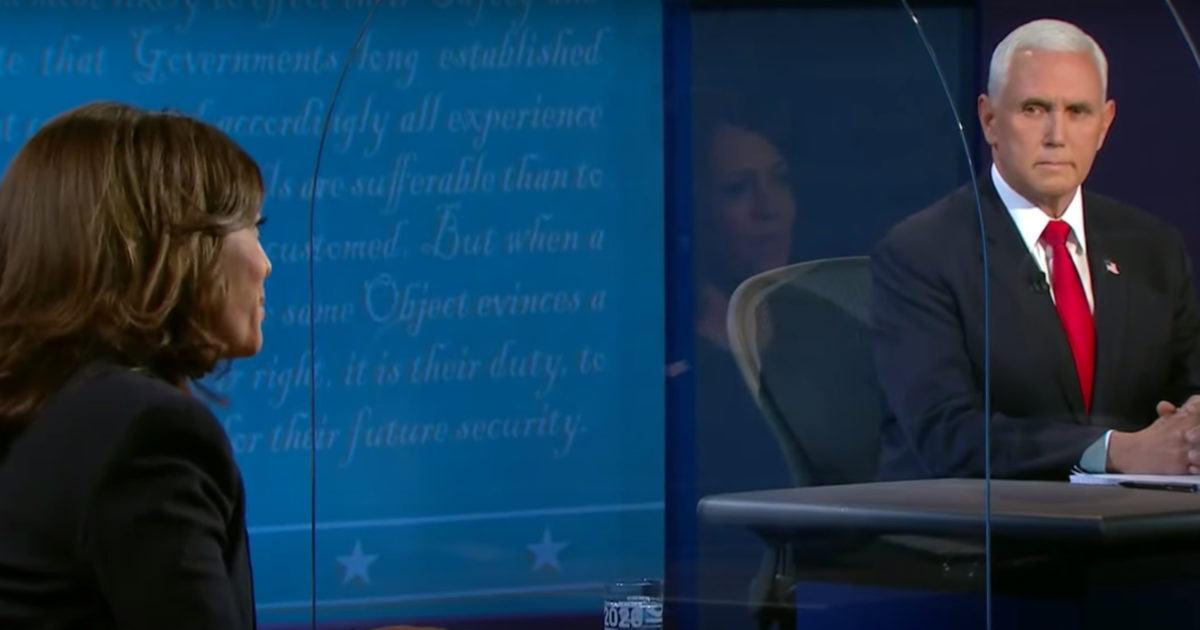 There was a feeling I just couldn’t get over as I watched the vice-presidential debate last week. I was glad to see I wasn’t alone:

It’s true that I think Mike Pence is a poised politician with a calm, reassuring demeanor. To be fair, a large part of that has to do with the fact that I’m sympathetic to his views on faith and politics. If I was ideologically opposed to Pence, what I describe as calm and reassuring would likely be transformed to smarmy and nauseating.

Still, the vice president is exceedingly boring. You get the feeling that if Pence was president, other than the maniacal histrionics from sexual revolutionaries who would spend every waking day waiting for the black helicopters to haul them off to conversion therapy camps, you wouldn’t remember he was there after a few weeks. And that, I still believe, is what a majority of Americans want.

Donald Trump is the polar opposite of that; he’s a mogul and entertainer. He is the news every day. Obviously part of that is the Democrat Media Complex’s obsession with destroying him. But no one in their right mind could deny that Trump loves being at the center of everyone’s attention, even when it is politically ill-advised.

Take Pence’s solid debate performance as an example. He and Kamala Harris had plenty of petty exchanges, but there was substantive exchange on a number of important issues. But what seized the headlines (other than the fly)? This:

During a Thursday Fox Business appearance, President Trump criticized vice presidential hopeful Sen. Kamala Harris (D-CA), calling her “a communist” and “monster”… “this monster who was on stage with Mike Pence – who destroyed her last night, by the way – but, this monster, she says, no, no there won’t be fracking, there won’t be this. Everything she said is a lie.”

Go back to Holden’s tweet from earlier and realize it’s this very kind of undisciplined and unhelpful presidential conduct that has crippled what should otherwise be a pretty easy re-election pitch.

After all, the Democrats have nominated a soon-to-be 78-year-old man who is dealing with what appears to be early onset dementia. Joe Biden is campaigning for the most stressful job in the world and yet never takes questions, consistently calls “lids” at 9 am, and when he does make public appearances, he embarrasses himself thoroughly. Like this:

With everything the country has come through, to still have the economic vitality that it does, with the most recent polling data showing an incredible majority of Americans who believe their lives are better off now than they were four years ago, there’s no explanation why Biden should be leading this race, particularly by landslide-type numbers.

Further evidence of this point comes from Gallup:

When many of us objected to Trump’s nomination in 2016 it wasn’t because we didn’t like the fact that he “fights.” It was how he fights, and even more importantly what he fights about, that concerned us. We worried that the integrity of real conservatism would be lost in a whitewashing defense of an individual, that the cause would be demoted for the advancement of a personality, and that the ascendancy of conservative values would be stunted for years because an entire generation came to equate it with the trappings of Trumpism.

A loss to this Democrat ticket would go a long way to justifying those fears.