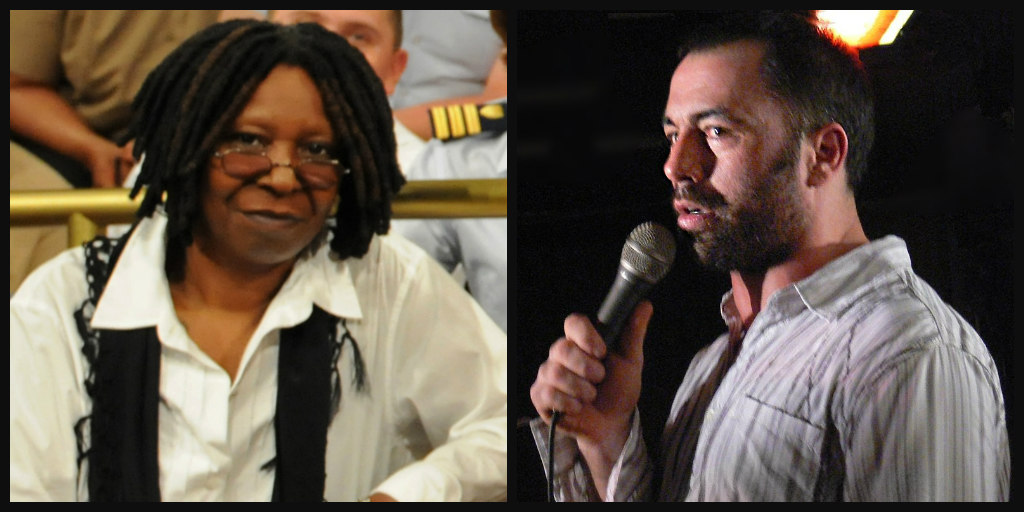 Sometimes the universe helps to clarify issues by presenting us with a counterfactual to controversial stories almost immediately. Maybe today’s topic isn’t really counterfactual since it is fact-based on its own, but it is ironic.

Last week, a big story was the Neil Young – Joe Rogan kerfuffle. As you probably recall, Neil Young demanded that Spotify pull his music from their platform saying, “They can have Rogan or Young. Not both.”

This led to much weeping and gnashing of teeth among Republicans because Joe Rogan has become a prominent anti-vaccine voice and, as such, is a darling of the COVID skeptics on the right. The accusation was that Young was trying to censor Rogan.

Fast-forward to this week when Whoopi Goldberg got into trouble on “The View” when she said that the Nazi murder of six million Jews in the Holocaust was “not about race” but rather “man’s inhumanity to man.” She also said that the genocide involved “two groups of white people.”

In reality, the Nazis viewed the Jews as “Untermenschen,” or subhuman, even though they were often indistinguishable in appearance and skin color from Aryan Germans. The Holocaust was based upon the racist Nazi ideology that Germans were the “Master Race.” I’ll point out also that German racism was not limited to Jews but also included Slavs, Gypsies, and pretty much anyone who wasn’t of Aryan descent.

I’m not going to defend Whoopi’s comments, which were ignorant. I am going to point out that there is a lot of overlap between people who were defending Joe Rogan’s ignorant comments last week and this week are celebrating the fact that ABC suspended Goldberg for two weeks.

If you think about it, the two cases are actually pretty similar. Both Rogan and Goldberg said things that are demonstrably untrue. Goldberg’s statement about the Holocaust was factually inaccurate and Rogan has made numerous inaccurate statements on his podcast.

Whoopi even promptly apologized for her remarks, both on television and on Twitter. She was nevertheless suspended despite her contrition.

On the other, Rogan was much less apologetic. The podcaster only apologized after Spotify had agreed to keep him on, although he did say that he is open to booking mainstream guests after talking with those who advocate for unconventional points of view that are considered by many to be misinformation.

As Hans and Franz might say, “Hear me now, listen to me later, and believe me sometime next week:” I’m not saying that Rogan should have been fired and I’m also not saying that Whoopi should not have been suspended.

What I am saying is that a large segment of the people who complain about cancel culture, microaggressions, and the heckler’s veto are inconsistent on the issue. How is it that people can defend Rogan in one breath and applaud Whoopi’s suspension in the next? It’s because they like Rogan and what he says but they don’t like Whoopi. It’s an ideological test rather than an objective one.

It’s not even about anti-Semitism or the Holocaust itself. Goldberg wasn’t saying that the Holocaust didn’t happen or that Jews didn’t deserve sympathy as the victims of genocide and I haven’t heard anyone accuse her of being anti-Semitic. On the other hand, many popular figures on the right, such as Marjorie Taylor Greene and Lauren Boebert, have demeaned the seriousness of the Holocaust by comparing vaccines and masks to mass murder without facing much blowback from Republicans.

It’s not surprising that people are more amenable to things they agree with than things they disagree with, but that also underscores the difficulty of policing speech in the public forum. There is an inherent bias in most of us against things that we disagree with and don’t want to hear as well as against people we don’t like.

So, for many of us, it’s fine when ABC suspends Whoopi for an inane and uneducated statement about the Holocaust, but you better keep your hands off Joe Rogan even though his podcast has emitted a sustained stream of misinformation for years. A stream of misinformation that, as I pointed out on Monday, is literally getting people killed in the midst of a pandemic.

So, what’s the solution? As I’ve said in the past, no answer is perfect but the best strategy is to let private companies decide how to handle their own content. If ABC wants to suspend Whoopi even though she threw herself on the mercy of the public and the network brass, that’s their decision. Likewise, if Spotify wants to keep Joe Rogan around and let him spew whatever misinformation he wants, that’s their right.

But neither ABC nor Spotify should be shielded from the consequences of their decisions. If Rogan’s podcast makes enough people angry enough to vote with their feet and move to a competing service, them’s the breaks. On the other hand, ABC is less likely to suffer an adverse reaction for suspending Whoopi. Nazi apologists are probably a much smaller segment of “The View’s” viewership than anti-vaxxers and conspiracy theorists are of Rogan’s podcast.

And again, it’s important to note that while deleting Rogan’s podcast and muzzling Whoopi could fall under the broad umbrella of censorship, neither would be a First Amendment violation. In both cases, the companies would be responding to market forces rather than government pressure. The First Amendment doesn’t protect you from the fallout when you say stupid things, but it does say that the government can’t stop you from saying stupid things.

When you get right down to it, I think one of the biggest differences between the Rogan and Goldberg dustups is the left’s tendency to eat its own. In quite a few cases, prominent liberals have been called to account for isolated comments or things that they said a long time ago.

I don’t think it’s helpful for the speech police to dredge up old sound bites or tweets and then hold up the offender to a virtual flogging, but at least there is some consistency when progressives use the same standard, however onerous and nitpicky, to hold members of both sides to account. Too often, I see people on the right (and the left as well) pointing to the speck in someone’s eye on the other side while ignoring the 2×4 in the eye of someone they like.

It’s a virtual certainty that people who live in the public eye on talk shows and podcasts are going to say something that is stupid, offensive, or both. The sheer volume of words required to fill the number of hours of airtime means that, like a monkey on a typewriter (like a word processer without a screen that prints directly to paper for the young folks) eventually writing a Shakespearean play, the law of probabilities combined with mealy-mouthed and often ignorant punditry are going to put feet in mouths. The question isn’t whether it’s going to happen, it is how to react when it does.

I do think that Whoopi was right to apologize and walk back her comments quickly. Maybe she’s even sincere. It was hopefully at least a learning experience for her.

But in the end, the overlords at ABC thought that it was a gaffe that needed a two-week timeout. And that’s their call to make and no one else’s.