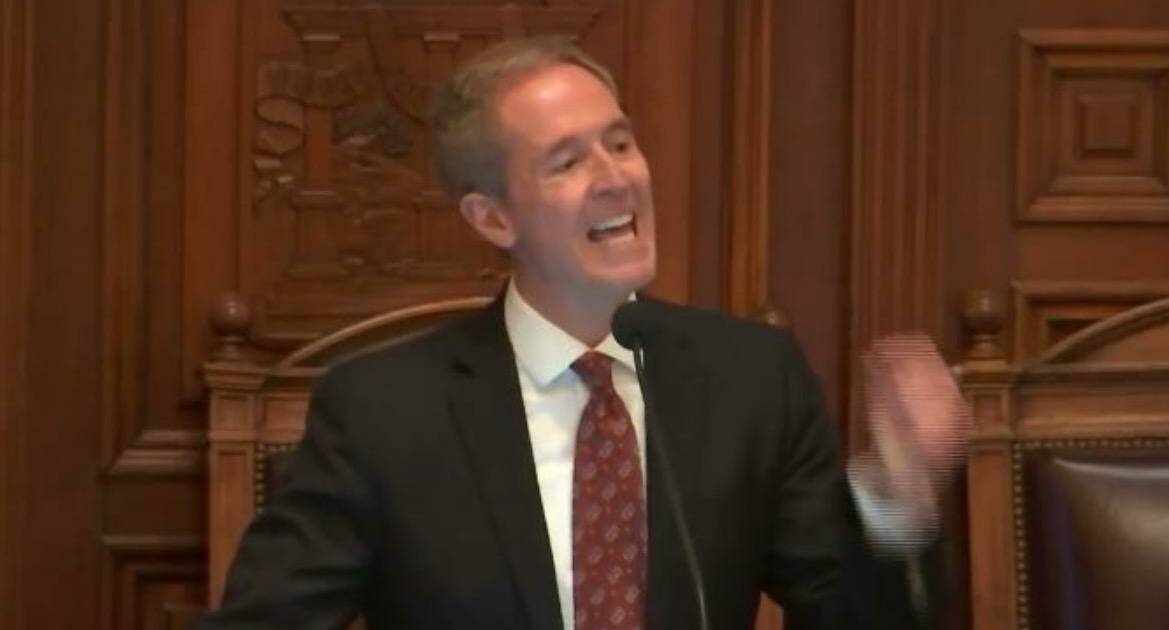 The Georgia House of Representatives has a tradition of opening the day’s session with a short sermon by a chaplain. Yesterday, the address was given by Andy Stanley, pastor of Atlanta’s Northpoint Community Church and the son of Charles Stanley, another famed Atlanta pastor.

Evangelical Christianity has gotten a bad rap over the past few years. Or rather, it has gotten a bad rep. During the Trump years, too many pastors, churches, and Christians have abandoned Biblical principles on the basis of “but the Supreme Court” or “what about the Democrats?” Divisiveness and dishonesty have become the order of the day on both sides of the aisle.

Pastor Stanley used his platform in the House of Representatives to take on both parties in a call for unity. The entire sermon is well worth the 14 minutes that it takes to listen. It’s a breath of fresh air.

“Disagreement is unavoidable,” Stanley says, “but division is always a choice.”

“Unfortunately, in your world, there are advantages to division,” he continues to the crowd of legislators. “You can raise more money when people are divided and sure that the other group is out to get them. Politically speaking, fear of the other party is an asset. Division makes it easy to demonize and mischaracterize the other folks.”

Then Stanley challenges his listeners: “Unfortunately, where you sit, fear and demonization and disunity is to your advantage. What if we as a state decided we’re not going to do that anymore?”

Stanley acknowledges that there will be disagreement between and even within the two parties, but points out that disunity and disagreement are not the same thing, saying, “Unity is a decision. Disagreement is helpful and healthy, but disunity just makes things harder for everybody.”

“Jesus says just because someone considers you their enemy, you do not have to return the favor,” he adds.

This is where a large part of the evangelical right has gone wrong in the past few years. There are progressives who hate conservatives and Republicans, but Christians are called upon to turn the other cheek, not look for fighters to strike back. Both Paul and Peter instructed us not to return evil for evil or insult with insult.

Stanley then warns against ascribing bad motives to political opponents and gives examples, noting how Republicans call all Democrats corrupt and Democrats say that all Republicans are racist.

“And you know that’s not true.”

“Their actions and decisions couldn’t possibly have anything to do with how they grew up, where they grew up, who they grew up around, how they were raised, and what they experienced along the way,” he continues. “These people aren’t responding to circumstances and experiences, they have character issues. They are corrupt from within.”

And what of those of us who aren’t legislators or political candidates? Stanley has advice for us too.

“When someone with a microphone starts ginning up the crowd with all that crap [this may be the only time a chaplain has ever used the word “crap” on the floor of the House of Representatives], don’t clap. Don’t say ‘amen.’ Don’t get caught up in it. Don’t approve of ‘divide-them-up-and-keep-them-scared’ leadership.’ Just walk out.”

Granted, there are bad and stupid people on both sides (see my note on Tucker Carlson below for one of example), but they don’t speak for everyone on their side. Don’t assume that the worst of either side represents everyone.

“And better than walk out, walk towards the middle, because the middle is where the problems are solved, you know that,” he adds.

“In the world of politics, the goal is to always appear as if you’re losing, but not to actually lose,” Stanley says. “What a terrible way to lead.”

“Do you love the State of Georgia more than you love your party?” Stanley asks in closing. “If not, maybe you should do something else.”

I could add to what Rev. Stanley said, but most of it would be superfluous. Nevertheless, I find myself doing it anyway. I’ll say “Amen!” and note that the path to making America great again is through unity and not through division. We can’t make America great by ripping it apart.

Neither party is “the Christian choice” and neither is composed entirely of godless infidels. There are good, Bible-believing Christians on both sides who just see things differently from you.

Political discussions could benefit from the advice given by marriage counselors. Don’t generalize, but be specific. Stick to facts and don’t ascribe motives to actions. Don’t use words like “always” and “never.” And don’t threaten a “national divorce.”

One of my former pastors had a habit of asking, “amen or oh me?” when he stepped on people’s toes with some difficult-to-follow Biblical truths. That is probably more appropriate here than a simple “amen.”

I’ve included the highlights of Stanley’s short sermon, but the entire video is worth your time.

Tucker Carlson is back to his old tricks. After defending Putin for years and suggesting that Americans need to fight the “tyranny” of masks and vaccine mandates, he now suggests that sending weapons to Ukraine is “counterproductive,” that it could “hurt the people I’m hoping to help,” and that it “could prolong the fighting in Ukraine at the expense of the vulnerable civilian population.”

Note to Tucker: What we are seeing from Russia is actual tyranny and it is worth fighting. The Ukrainian people are dying for their freedom. The least that we can do is make sure that they have adequate weapons and supplies to defend their country.