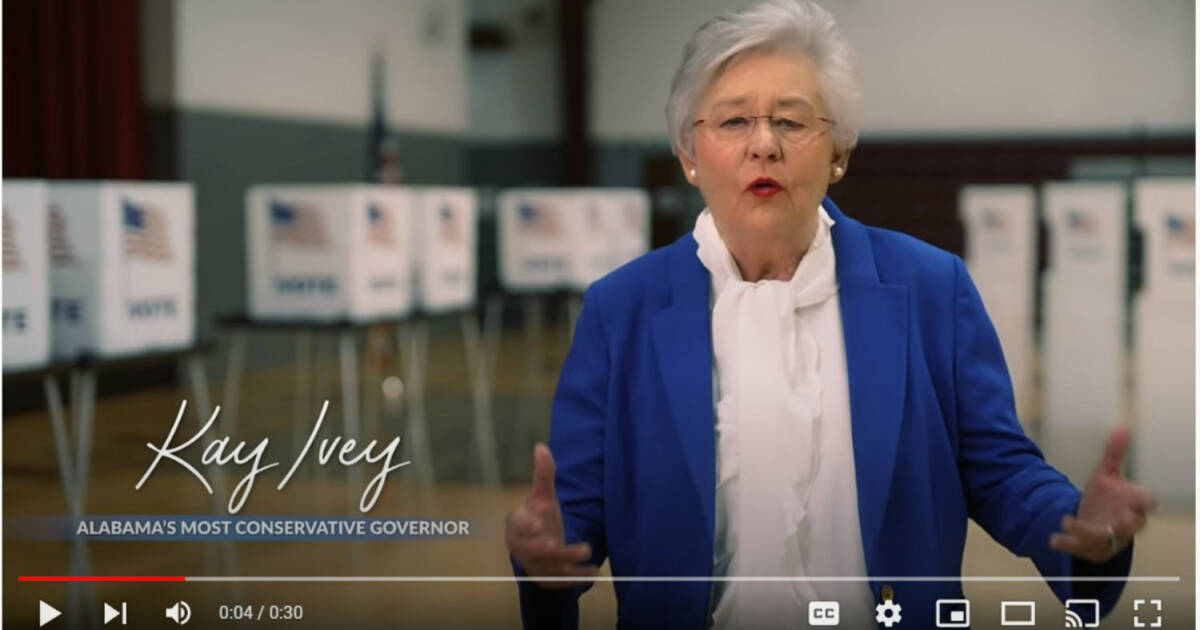 Last week, a new campaign ad for Kay Ivey encapsulated the problem faced by the Republican Party. The Alabama governor ranted about fake news and stolen elections in a political ad that could be taken from the comments of a social media post or a Tucker Carlson monologue.

The white-haired executive, who resembles a grandmother from central casting, says in the ad, “The fake news, Big Tech, and blue-state liberals stole the election from President Trump, but here in Alabama, we are making sure that never happens. We have not, and will not, send absentee ballots to everyone and their brother. We banned corrupt curbside voting, and our results will always be audited. I’m Kay Ivey. The left is probably offended – so be it. As long as I’m governor, we’re going to protect your vote.”

Of course, if you followed the investigations of alleged election fraud, you know that Donald Trump and his lawyers were never able to present evidence in court to back up his claims that the election was stolen despite repeated warnings that they were about to “unleash the Kraken.”

Since the Kraken’s crackup, Trump lawyers have been fined by courts for filing frivolous lawsuits and making dishonest claims. Many pro-Trump lawyers and pundits are being sued for defamation and Sidney Powell offered the defense that “no reasonable person would conclude that the statements were truly statements of fact.” The stolen election claims have been thoroughly debunked and the people who spread the lies are running for cover.

I live near enough to Alabama that we get some local news from ‘Bama stations. I watched Gov. Ivey through the pandemic and she did not appear to be one of the Republican governors who bought into conspiracy theories. She seemed to try to balance the science and health advice from experts with the realities of her constituents.

So why is Kay Ivey running an ad about stolen elections?

As it turns out, Ivey’s ad follows an attack from challenger Lindy Blanchard, a self-described “Trump Republican,” who charged that “Kay Ivey thinks Biden’s victory was legitimate.” In other words, the accusation that the governor believes the truth about the 2020 election is political poison in Alabama’s GOP primary.

So the problem here seems to be the Republican base. Ivey’s reassurance about stolen elections is aimed at the Republican voters in the state’s GOP primary. Polling shows that about a third to half of Republicans believe that Donald Trump won the election.

Alabama is probably the Trumpiest state in the union. It’s a place where, when Rep. Mo Brooks didn’t get the coveted Trump endorsement, the congressman didn’t attack Trump but rather blamed Mitch McConnell for “manipulating” The Former Guy. Embracing the Big Lie probably still won’t be enough to cost Ivey the general election.

The voters may be putting pressure on Kay Ivey, but she has final responsibility for joining in the Big Lie that “The fake news, Big Tech, and blue-state liberals stole the election from President Trump.”

The Republican problem is two-fold. Voters are being misled by the MAGA pundit class and elected officials are too spineless to tell them the truth. The irony is many of these people are Christians yet they are knowingly propagating a lie for partisan benefit. (Several different lies actually.)

To the extent that traditional conservative principles still exist in the GOP, the party does have something positive to offer, but the good ideas that Republicans have are tucked into a sandwich of voters that are caught up in conspiracy beliefs and officeholders that are afraid to cross them.

Where does that leave us?

The midterm elections are not looking good for Democrats. Off-year midterms typically go poorly for the party in power and inflation and high gas prices, along with progressive craziness on gender and the like, have turned many swing voters against the Democrats. But if and when Republicans return to power they are setting themselves up to disappoint and anger their constituents once again.

I remember the post-Obamacare years. Republicans railed against Obamacare and promised to repeal the law if they were returned to power. Voters handed the party the House, the Senate, and finally the presidency, but the Affordable Care Act is still intact to this day. Why? Because Democrats passed it with a filibuster-proof supermajority and Republicans have not had nearly that many votes in the Senate since.

The problem for Republicans is that their voters never understood that Democrats would filibuster each and every attempt to repeal Obamacare. They believed that traitors and RINOs within the GOP were selling out and betraying them. When John McCain, Susan Collins, Lisa Murkowski voted with Democrats to kill the final attempt to reform Obamacare in 2017, the Republican base couldn’t believe that it was because that’s what their constituents wanted, but the proof is in the fact that the two surviving members of the trio are still in office.

If the MAGA Republicans return to office, whether behind Trump or someone else, they’ll face similar expectations. If the election was stolen, the GOP base will expect prosecutions, not to mention an end to the inflation that is totally all Biden’s fault and has nothing to do with the pandemic supply problems or Putin’s war in Ukraine [end sarcasm].

Since Obamacare, neither party has had the numbers to force through their agenda. But partisans of both sides don’t understand why a 51-vote majority is not a blank check.

Republican expectations will be hard enough to fulfill, but the most dangerous one is that the Republican base won’t want to lose another election. There will be intense pressure on Republicans in Congress and the executive branch to succeed where they failed on January 6.

It’s going to happen again. There will be another fight over the outcome of the election, and this time, they’ll be ready. And it is Republicans like Kay Ivey, who pay lip service to the Big Lie even though they probably don’t believe it, rather than risking their careers by telling voters the truth.

The Republican focus is on transgender and CRT, but these issues won’t destroy America. Undermining faith in elections and fighting to overturn every disappointing result might.